Election Commission of Sri Lanka Chairperson Mahinda Deshapriya ensured the public that the polling station will be the safest public space and encouraged voters to exercise their right to vote on 5 August 2020. 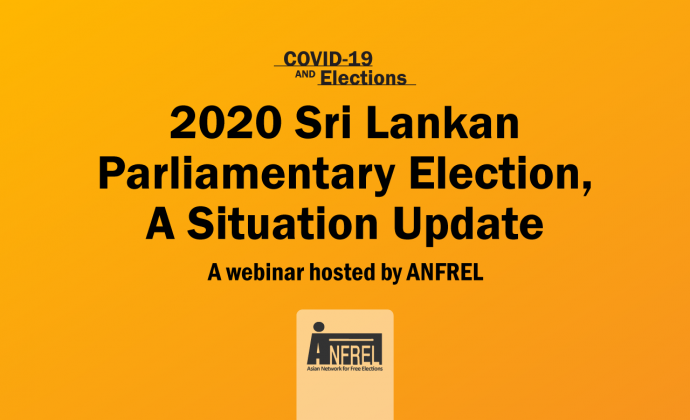 Posted by ANFREL With 0 Comment In ANFREL News, Sri Lanka

Election Commission of Sri Lanka Chairperson Mahinda Deshapriya ensured the public that the polling station will be the safest public space and encouraged voters to exercise their right to vote on 5 August 2020.

"Don't be afraid. This [polling station] is the safest public place. It is safer than markets or transportation stations or any other government office. So please come and vote," Deshapriya said during ANFREL’s (Asian Network for Free Elections) webinar on 27 June 2020 about the 2020 Sri Lankan Parliamentary Election.

The election is among those around the world that will take place amid the COVID-19 pandemic which has caused delays and cancellations of scheduled elections due to threats to public health and safety. The Sri Lankan Parliamentary Election was originally scheduled for 25 April 2020 but was postponed due to the COVID-19 situation.

Led by guidelines that health authorities have issued, EC has conducted a series of mock polls to test health and safety measures and is in the process of educating officials, polling staff and political party officials on measures to be taken.

Among the precautions that will be implemented, Deshapriya said, are the wearing of face masks and face shields for polling staff, hand sanitizers, and imposition of one meter distance in queues and inside polling stations.

Registered voters in quarantine centers will also be given the chance to cast their votes inside the centers.

Deshapriya demonstrates the use of face masks and hand sanitizers.

Deshapriya said they are still in the process of discussing whether or not voting hours will be extended. While new polling stations will not be added, he said the number of queues might increase in heavy polling stations as they have done during the presidential election.

Asked about the cost of the conduct of the election, Deshapriya said it will be unavoidable to increase cost as additional polling staff with medical personnel will have to be deployed for the election. 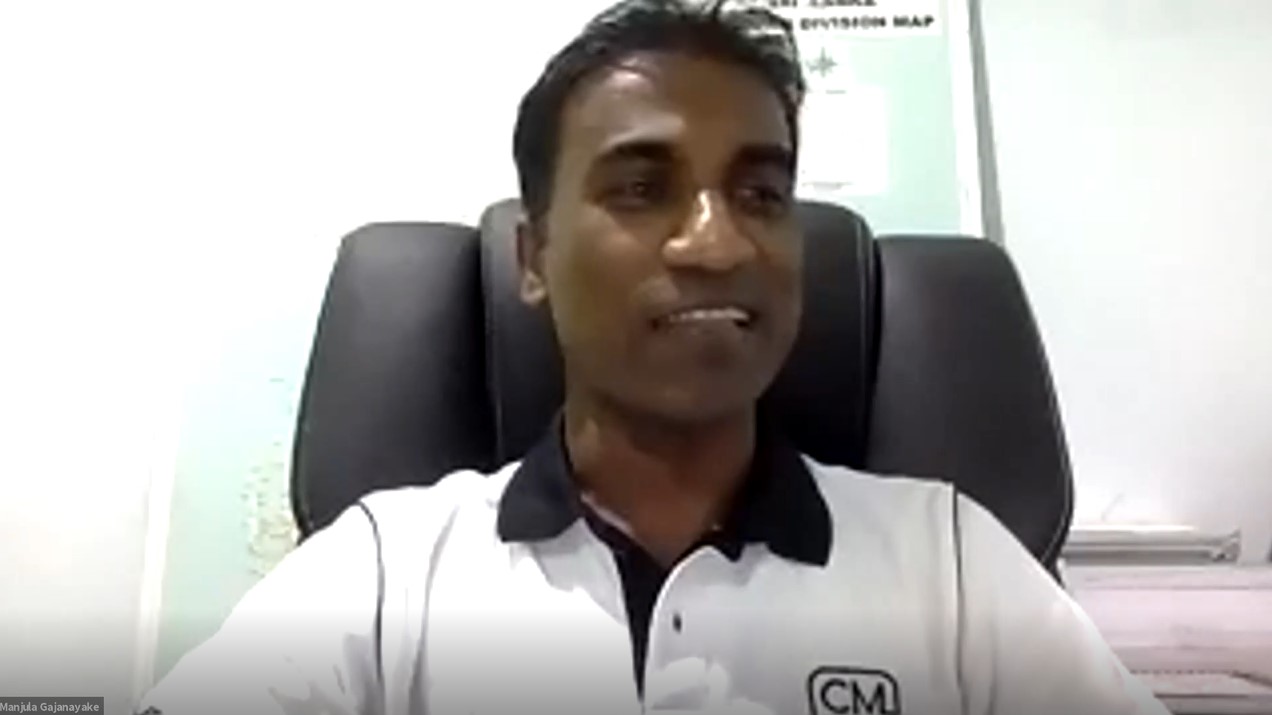 Also affected by precautionary measures for this election is the campaigning of political parties. Ganjanayake said “the most frustrating and frightening thing before us is whether an equal level playing field will be created in such a context.”

Ganjanayake said election rallies with huge crowds are prohibited, the maximum number of people allowed in a meeting is 100, and only three persons can take part in house to house campaigning.

Most of the campaign activities would have to move online. But while 34 percent of the Sri Lankan population have access to the internet, Ganjanayake said it may not be easy for those in remote areas to do online campaigns.

Still, Deshapriya said there are other campaigning mechanisms that political parties can employ. He said “we are trying our best to ensure that an equal level playing field is there.” 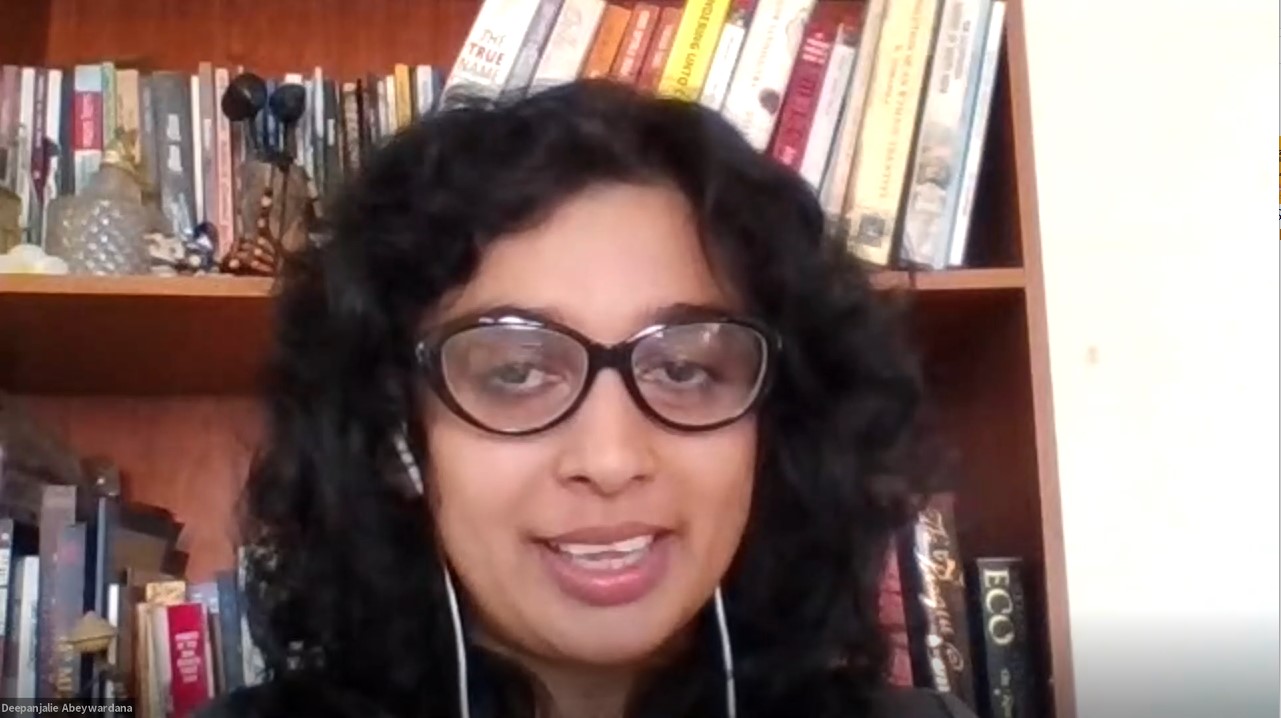 Since election-related activities would be more prominent in the media, Abeywardana asked the voters to be mindful of what they consume and at the same time enjoined the media to act in an ethical manner.

Recognizing that the democratic elections would not be possible without the media, Abeywardana said “a free and fair election becomes possible when the public are informed of the party positions, candidates, and of the electoral process overall.”

She said the people should be careful from falling into “information disorder” and “news pollution” during elections. “"As much as the COVID-19 is the disease or the thing that we have to watch out for, we also have to watch out for some of the diseases or ailments that the media may be suffering from not just in Sri Lanka but also globally.”

Among bad media practices that she said people have to look for are one-sided reporting and the lack of counter narratives and challenges to dominant ideologies that may not necessarily be accurate.

The Election Commission has issued a media guideline to ensure fairness and balance in media reporting during elections. Abeywardana recognized that the guideline addresses the basic principles of media ethics and said that it is up to the media to ensure that they are “accurately reporting and that they do not end up misleading the public.”

One issue, on the other hand, where Sri Lanka has improved on is election-related violence. Ganjanayake said incidents of violence during the election period have significantly decreased and that this is expected to remain the same for this election.

Ganjanayake also said that even during times of insurgencies, Sri Lankan voters have never been deterred from exercising their right to vote. The Sri Lankan electorate is highly engaged with a usually high number of voter turnout which is not expected to go down even under the current circumstances.

Despite these challenges, Deshapriya seems to remain steadfast in fulfilling his office’s mandate in ensuring a free and fair election. He said international election observer groups are welcome to observe the parliamentary election.

“We have to safeguard democracy in this country so we will conduct free and fair, not only free and fair, but a transparent and credible election," Deshapriya said.