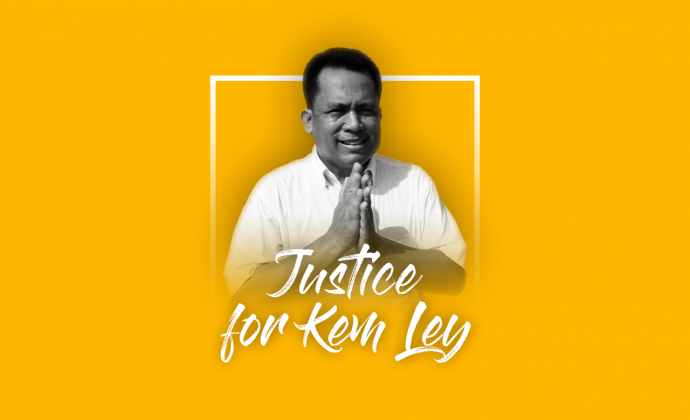 Cambodia: No justice at 5-year anniversary of Kem Ley’s death

Today, in advance of the fifth anniversary of the unlawful killing of prominent political commentator and human rights defender Kem Ley, the 45 undersigned organizations reiterate their call for the Cambodian authorities to create an independent Commission of Inquiry tasked with conducting an independent, impartial and effective investigation into Kem Ley’s death.

To date, the Cambodian government has consistently failed to achieve justice for Kem Ley and his family.

On 10 July 2016, against a backdrop of escalating attacks on civil society and the political opposition in the country, Kem Ley was shot in a café at a petrol station in central Phnom Penh.

Police quickly arrested Oeuth Ang – who inexplicably identified himself as “Choub Samlab” or “Meet to Kill” – as he fled the scene. According to police, the suspect “confessed” to the killing and claimed his motive was an unpaid debt of US$3000 Kem Ley owed him, a claim disputed by Kem Ley’s widow and Oeuth Ang’s wife.

On 23 March 2017, after a half-day trial hearing, the Phnom Penh Municipal Court found Oeuth Ang guilty of the murder of Kem Ley and sentenced him to life imprisonment. To date, there has been no independent, impartial and effective investigation to establish whether anyone else was involved in the killing. On 24 May 2019, Cambodia’s Supreme Court rejected Oeuth Ang’s appeal for reduction of sentence and upheld his life imprisonment term.

The International Commission of Jurists (ICJ), Amnesty International, and Human Rights Watch have previously highlighted key aspects of the case that have not been adequately investigated, and were not adequately addressed at trial. The failure to address such deficiencies raises concerns about prosecutors’ priorities to secure a quick conviction rather than comprehensively investigating the case, including uncovering information about other possible conspirators who may have been involved.

In light of these failings, the conduct of the investigation cannot credibly be said to have been thorough, independent, impartial or effective as required by the International Covenant on Civil and Political Rights (ICCPR), to which Cambodia is a party, and the revised Minnesota Protocol on the Investigation of Potentially Unlawful Death (2016).

Pursuant to the ICCPR, Cambodia has a duty to promptly, independently, impartially, and effectively investigate all deaths suspected of being unlawful. Investigations must seek to identify not only direct perpetrators but also all others who may have been responsible for criminal conduct in connection with the death.
Background

The human rights record of modern Cambodia has been plagued by impunity. In the report released by the ICJ in 2017 highlighted that the lack of accountability in Cambodia was inextricably linked to the Government’s effective control of the judiciary.

On the fifth anniversary of his killing, we demand justice for Kem Ley.