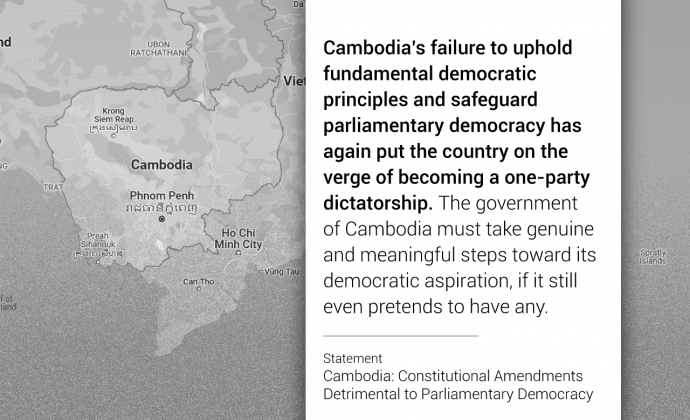 Posted by Campaign & Advocacy With 0 Comment In Cambodia, Statements

The Asian Network for Free Elections (ANFREL) is alarmed by the constitutional amendments passed on 28 July 2022 by the National Assembly of Cambodia that are detrimental to parliamentary democracy. The ruling Cambodian People’s Party (CPP), which controls all of the seats in the National Assembly, is preparing for the post-Hun Sen era by making it easier for his son Hun Manet to be elevated to the position of prime minister when the time comes.

Hun Manet has been endorsed to succeed his father Hun Sen, paving the way for the establishment of a political dynasty in the country. Hun Sen has ruled Cambodia since 1985, and in recent years crackdowns against the opposition have ensured the continued dominance of the CPP. The ruling party, which has controlled all 125 National Assembly seats since 2018, now seeks to maintain its unchecked power in the future by diminishing the powers of the National Assembly.

Among the most concerning changes is a revision to Article 119 which will provide the political party with a majority of seats in National Assembly the direct authority to designate the Prime Minister and hence will bypass the National Assembly and prevent a public debate, and an amendment to Article 98 that raises the quorum to table a motion of censure against a cabinet member from 30 to 42 lawmakers.

The move shows that the rise of the opposition Candlelight Party has posed a challenge to the dominance of the CPP. Despite the prevalence of threats against the opposition and civil society, as assessed by ANFREL’s pre-election assessment, the Candlelight party was able to win one-fifth of the commune and sangkat council seats in the June 2022 elections. The constitution amendments would ensure CPP’s uninterrupted rule beyond the National Assembly elections in July 2023 by making the participation of the opposition lawmakers in the National Assembly difficult or almost impossible.

It is also now more obvious than ever that the constitution amendments are meant to create a smooth transition for Hun Sen’s son Hun Manet into the position of prime minister. Hun Manet has been endorsed to succeed his father Hun Sen, paving the way for the establishment of a political dynasty in the country.

Cambodia’s failure to uphold fundamental democratic principles and safeguard parliamentary democracy has again put the country on the verge of becoming a one-party dictatorship. The government of Cambodia must take genuine and meaningful steps toward its democratic aspiration, if it still even pretends to have any.