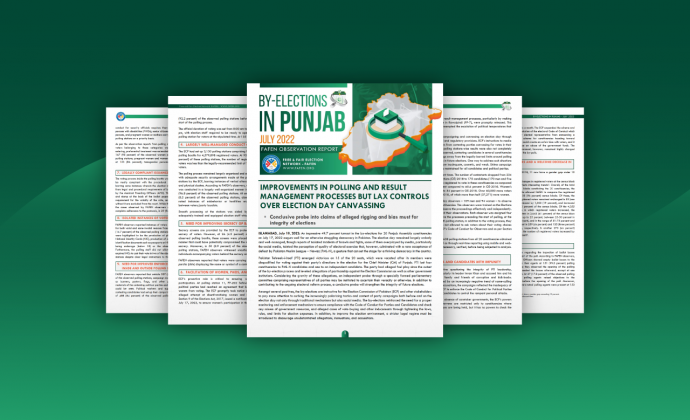 ISLAMABAD, July 19, 2022: An impressive 49.7 percent turnout in the by-elections for 20 Punjab Assembly constituencies on July 17, 2022 augurs well for an otherwise struggling democracy in Pakistan. The election day remained largely orderly and well-managed, though reports of isolated incidents of brawls and fights, some of them overplayed by media, particularly the social media, tainted the perception of quality of electoral exercise that, however, culminated with a rare acceptance of defeat by Pakistan Muslim League – Nawaz (PML-N), a gesture that can set the stage for a thriving democracy in the country.

Pakistan Tehreek-i-Insaf (PTI) emerged victorious on 15 of the 20 seats, which were vacated after its members were disqualified for voting against their party’s directions in the election for the Chief Minister (CM) of Punjab. PTI lost four constituencies to PML-N candidates and one to an independent candidate. The party had alleged foul play since the outset of the by-election process and leveled allegations of partisanship against the Election Commission as well as other government institutions. Considering the gravity of these allegations, an independent probe through a specially formed parliamentary committee comprising representatives of all parties may be instituted to ascertain their veracity or otherwise. In addition to contributing to the ongoing electoral reform process, a conclusive probe will strengthen the integrity of future elections.

Amongst several positives, the by-elections are instructive for the Election Commission of Pakistan (ECP) and other stakeholders to pay more attention to curbing the increasingly polarizing tactics and content of party campaigns both before and on the election day not only through traditional mechanisms but also social media. The by-elections reinforced the need for a proper monitoring and enforcement mechanism to ensure compliance with the Code of Conduct for Parties and Candidates and check any misuse of government resources, and alleged cases of vote-buying and other inducements through tightening the laws, rules, and limits for election expenses. In addition, to improve the election environment, a stricter legal regime must be introduced to discourage unsubstantiated allegations, insinuations, and accusations.

The ECP ensured appreciable improvements in polling, counting, and result-management processes, particularly by making sure that preliminary results of all constituencies, except for the one in Rawalpindi (PP-7), were promptly released. This ensured greater public confidence in the election outcome and also preempted the escalation of political temperatures that generally arise as a result of delayed results.

However, the ECP’s enforcement remained weak for curtailing the campaigning and canvassing on election day through electronic media and social media primarily due to inadequate legal and regulatory provisions. ECP’s instructions to media on election coverage were largely circumvented, with political leaders from contesting parties canvassing for votes in their media appearances on election day. Instructions for the telecast of polling stations-wise results were also not completely adhered to. While these practices outside polling stations were also observed, contesting candidates in several constituencies also employed newer ways to woo voters such as rallies and gatherings away from the legally-barred limits around polling stations. The election law needs to be reinforced to curb such practices in future elections. One way to address such situations is to introduce effective checks on the use of money, which currently are inadequate, cosmetic, and weak. Unless campaign finance rules are tightened, a level playing field will be difficult to be maintained for all candidates and political parties.

This report is based on the observations received on election day from 638 polling stations from all 20 constituencies obtained by FAFEN observers through a specially-established call center as well as through real-time reporting using mobile and web-based applications. The data, once received, was cleaned and where necessary, verified, before being subjected to analysis.