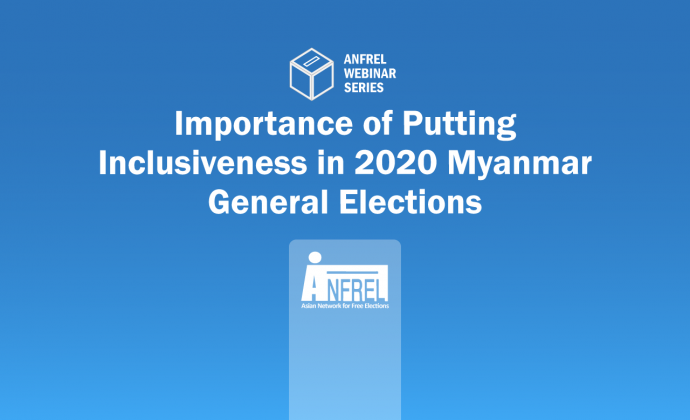 ANFREL Webinar Series: To achieve free and fair elections, no one should be left behind

No one should be left behind.

Panelists, during ANFREL’s webinar on the importance of inclusiveness in the 2020 Myanmar General Election, representing various sectors like women, ethnic groups, persons with disabilities (PWDs), and the LGBT community agree that free and fair elections can only be achieved if elections are inclusive to their issues and struggles.

Daw Khin Lay Nge said that while women outnumber men in terms of population, men are more involved in political processes thus issues and challenges of women are less represented in the policy making process.

U Nay Win Naing, meanwhile, said access to information and language barrier are some of the issues voters and candidates belonging to ethnic groups face during elections. For voters, some campaign materials are not available in ethnic languages and for candidates, not being fluent in Myanmar language can be challenging. Members of ethnic groups also face discrimination, threats and harassment that discourage them from participating in elections and political affairs.

For the LGBT sector, Saw Zin Maung Soe said there are members of the LGBT sector in governance but most of the time, they cannot reveal their identity due to the risk of discrimination. Issues and struggles of the community are also hardly addressed.

U Nay Lin Soe said the lack of ID cards for PWDs is a challenge as they are not afforded assistance in many aspects of elections like in campaigns and in polling stations which discourage them from participating in elections. Accessibility issues are a main concern for the sector, as well.

The Asian Network for Free Elections is hosting a series of webinars in the lead up to the 2020 Myanmar General Election scheduled for 8 November 2020 to provide a platform for sectors and their issues to be discussed and heard.