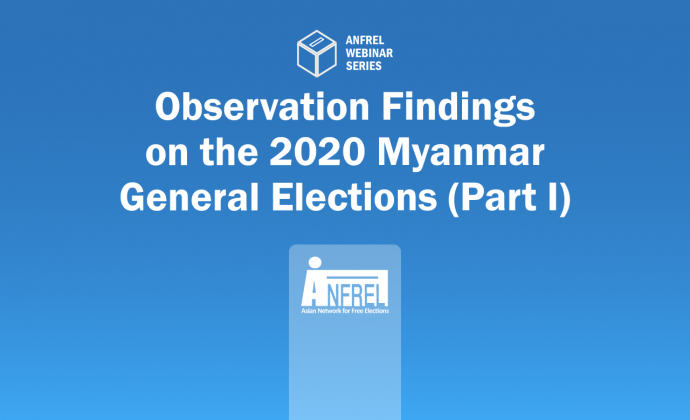 While the Election Day in Myanmar has been observed to be generally peaceful, a panel of local election observer groups agreed that certain measures need to be taken to improve the electoral process in the country.

Mya Nandar Thin said there were more conflicts seen in 2020 than in the 2015 elections. She said NMF found around 600 cases of unusual circumstances like posters destroyed, movement of military manpower, violence in conflict and non-conflict areas, and cases of kidnapping and assassination. She also said hate speech and misinformation were rampant both offline and online, ethnic and religion attacks were observed, and inter-party disputes.

Nang Wah Nu, meanwhile, said ethnic parties were at a disadvantage as they could not travel freely and could not put up assemblies due to the restriction in place amid the COVID-19 pandemic. She said the ruling party National League for Democracy (NLD) benefited from the government's efforts in providing relief during the crisis as people saw them as NLD's efforts.

On participation of women in elections, Khin Lay Nge said while their participation has increased compared to the previous general elections, they continue to face difficulties and pressure as they have to be dutiful to their family affairs on top of their party duties.

Khin Lay Nge, however, remains hopeful that women participation in electoral processes will improve because of their strong interest. She said they utilized women observers in their mission albeit using less people in their observation due to certain restraints. In order to improve the electoral processes, Mya Nandar Thin said people should be more informed about the role of election management bodies especially in addressing conflict and violent situations during elections. Enforcement of security measures in the next elections should be improved as this was found weak.

NMF also observed the training of a special police force particularly on protecting the electoral process and recommended that this be enhanced in the future. They also recommend the Union Election Commission to explore alternative methods in checking the voter roll.

Nang Wah Nu echoed this as some people were not able to vote because their names were not in the voter roll. She said the use of voter cards can be explored to minimize errors in the voter roll. She also said there should be equal rights on law enforcement between big parties and small ethnic parties. She said ethnic people felt they were being pushed out of the parliamentary process by not being able to actively participate in the electoral processes due to limitations and unfair treatment. With many conflict situations in many parts of the country, she said the peace process should also be well accomplished.

This webinar is part of a series of webinars which aims to create public awareness on democratic elections and a platform for various groups to discuss election issues in the lead up to the 2020 Myanmar General Election.

The ANFREL Webinar Series previously discussed the importance of inclusiveness in elections, candidate registration, voter list display and voter education, COVID-19 and the Myanmar polls and election observation during the COVID-19 pandemic. ANFREL is holding monthly webinar sessions to provide a platform for civil society organizations to discuss election-related issues and promote democratic elections in Myanmar.