ANFREL-Foundation Chairperson Damaso G Magbual along with Capacity Building Coordinator Mr. Bidhayak Das met Chairperson of the Union Election Commission (UEC) of Myanmar U Tin Aye at the UEC office in Napyitaw on July 11. The meeting, which lasted for an hour discussed ways to strengthen electoral reforms initiatives in Myanmar and the role ANFREL-Foundation can play in enhancing the electoral process.  Chairperson of UEC U Tin Aye told the ANFREL team that the UEC has been engaging with international groups in order to learn from other systems and build the capacity of the UEC officials. ANFREL Chairperson Mr. Magbual explained ANFREL-Foundation’s operations in other countries in Asia and also shared its expansion plans in particular through its capacity building initiatives and also advocacy. 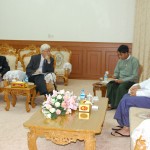