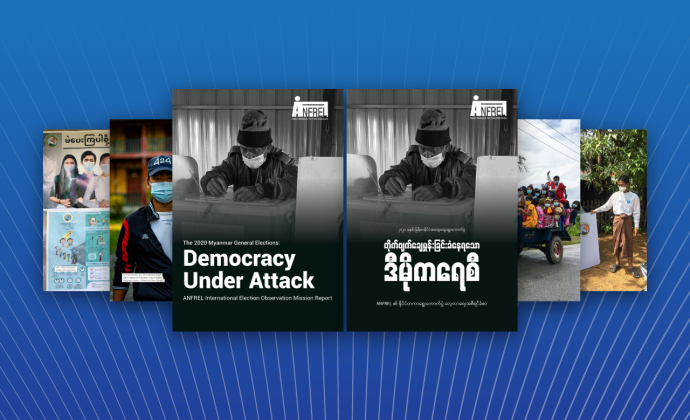 Posted by ANFREL With 0 Comment In Mission Reports, Myanmar

The Asian Network for Free Elections (ANFREL) released the final comprehensive report of its international election observation mission to the 2020 Myanmar General Elections on 17 May 2021.

The 2020 Myanmar polls encountered several challenges including restrictions amid the COVID-19 pandemic. Despite the observed shortcomings, the outcome of the elections were deemed to reflect the true will of the electorate.

The members of the Pyithu Hluttaw (lower house of Myanmar's national Parliament) were scheduled to convene for their swearing-in ceremony on 1 February 2021, but, the Myanmar military staged a coup and seized power from the civilian government alleging electoral fraud. Several key political figures and activists including President U Win Myint, State Counsellor Daw Aung San Suu Kyi, and the chair of the Union Election Commission (UEC) U Hla Thein, were arrested. The country was placed under state of emergency.

The people of Myanmar continue to resist military rule through peaceful protests across the country but such efforts have been met with violent crackdowns by the military arresting thousands and killing hundreds of people.

ANFREL recognizes the voice of the people of Myanmar and hopes this report illustrates the progress achieved by Myanmar as a democracy prior to the coup. ANFREL wishes that the country may soon return on the rightful path to an elected civilian government.

ANFREL deployed 13 long-term observers for 24 days, eight short-term observers for eight days, three Election Day observers, a core team based in Yangon, and four electoral analysts, one in Yangon and the rest working remotely. The observers were deployed in 13 out of 14 states and regions in Myanmar.

ANFREL's international election observation efforts follow a methodology based on international principles contained in documents such as the International Covenant on Civil and Political Rights, the Bangkok Declaration for Free and Fair Elections, and the Dili Indicators of Democratic Elections. ANFREL is a signatory of the Declaration of Principles for International Election Observation.