Posted by admin@anfrel.org With 0 Comment In Mission Reports, Myanmar

A Significant Step for Myanmar’s Democracy that Deserves Continued Vigilance

Yangon – The Asian Network for Free Elections(ANFREL) wishes to enthusiastically congratulate the people of Myanmar on their holding of General and Local Elections on November 8, 2015. Voters turned out in large numbers to peacefully exercise their democratic right to choose their own elected representatives. With many waiting in the early morning darkness hours before polls opened, the enthusiasm and patience shown by voters throughout the day is commendable. Through their determination, they have sent the world a message that the people of Myanmar are ready and willing to work towards a more democratic future.

ANFREL also wishes to compliment the Union Election Commission (UEC) for its management of the election in what was admittedly an often difficult environment. While the UEC’s work is far from finished, the efforts of Polling Station staff to create an environment conducive to free and fair elections is worth noting. Given the decades since the last competitive national elections, the UEC generally performed admirably to manage the process. ANFREL is pleased to report that the improved performance of the Election Commission is one of the most significant and impactful differences when comparing this Election to the 2010 General Elections.

Mr. Damaso Magbual, ANFREL’s Head of Mission, agreed when he said that “While important parts of the Election Process remain, the pre-election period and Election Day give Myanmar a good chance for credible elections and a more democratic future. Where irregularities exist or are alleged, ANFREL encourages the UEC and all involved stakeholders to thoroughly investigate these cases and administer justice in a professional, objective, and timely manner.”

Democratization is a process and the 2015 Elections will, ANFREL hopes, provide a solid foundation for that process. This election, like all elections, was not perfect but ANFREL hopes that it will be the first in a series of continuously improving democratic elections in the country. To ensure that legacy, it is important that all stakeholders carry out important post-election activities that protect the integrity of the process.

Among the most critical of the post-election processes is the transparent and timely release of Election Results. The UEC has taken several steps to try and instil this year’s election with greater transparency and ANFREL very much hopes that the release of the results reflects these efforts. By immediately posting all original results forms at sub-commission offices and online, and by releasing detailed PS level lists of results, the UEC can avoid unnecessary suspicion or distrust in the counting process. Where results cannot be released or require further investigation, clear communication to the media, observers and the public at large will help create mutual understanding and faith in the tabulation process.

On Election Day, ANFREL was encouraged to find that the voter list did not create any serious problems for most voters arriving to vote. Still, ANFREL hopes that the Election Commission can take a more pro-active approach to ensuring the Voter List includes all the eligible voters of Myanmar. In a country where Elections have been rare, it is unsurprising that many voters were unaware that they needed to check their name on the voter list. If provided with the appropriate resources, the UEC can conduct more of the type of active voter registration that was seen in some areas. ANFREL also hopes to see an even deeper engagement by the Media and Civil Society to conduct more Voter Education that includes information about voter registration.

Regarding Advance Voting, more training and additional control over some aspects of the process will increase confidence in the process and eliminate some of the existing shortcomings ANFREL’s observers reported in some areas. The observers saw a great deal of procedural variation, indicative of the need for more training, in the implementation of in-constituency advance voting from one sub-commission office to the next. Additional training that leads to more procedural uniformity will ensure regulations are strictly followed and will increase public confidence in the UEC’s management of the elections.

Even more troubling was certain aspects of the out-of-constituency advance voting, in particular the advance voting of the military and police in some areas. While improved from 2010, the special privileges enjoyed by these institutions create opportunities for fraud and electoral misconduct and the general lack of access for observers magnifies those problems. Moving Polling Stations out of military camps and beginning a transition towards normalizing military voting in more ordinary Polling Stations will help protect the voting rights of individual soldiers and will remove one of the electoral system’s lingering weaknesses.

As the country hopefully grows into democratic maturity, ANFREL hopes that its elections can also grow more inclusive. The large numbers of potential voters who were excluded or unable to participate in the process is perhaps the elections’ most significant shortcoming. In the spirit of democratic inclusiveness and long-term peace in the country, steps can and should be taken to include all the people of Myanmar, no matter their race or religion or where they happen to live, in Myanmar or abroad.

As the election is very much not over, ANFREL calls on all parties and candidates to work together going forward to facilitate the investigations of the UEC and, once investigations have run their course and final tallies are known, accept the results of the election. Those candidates that have graciously conceded defeat set a commendable example for others.

For the future improvement of the country’s Electoral System and because every election has areas for improvement, ANFREL wishes to offer some constructive recommendations based on the observations of its forty-seven observers working across all fourteen States and Regions and in 304 Polling Stations on the 8th. These recommendations are included in the Preliminary Report ANFREL released today. ANFREL will continue to observe the electoral process including the continued tabulation and announcement of results as well as the complaints and appeals processes. Both the preliminary findings and the recommendations will be further substantiated in a Final Report.

“While there of course remains room for improvement, the election process up until today has exceeded expectations and certainly provided the people a means through which to have their voices heard,” concluded Mr. Magbual. 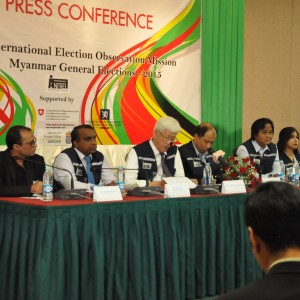