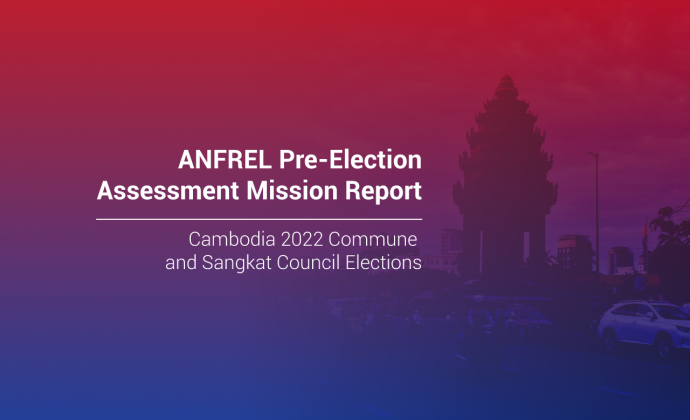 The Asian Network for Free Elections (ANFREL) published its pre-election assessment report of the 2022 Cambodia commune and sangkat council elections on 6 May 2022.

Cambodia will hold its fifth commune and sangkat council elections on 5 June 2022. About 9.2 million registered voters are expected to elect the chief and councilors among over 80,000 candidates in 1,652 communes/sangkats across the country.

In March 2022, The Asian Network for Free Elections (ANFREL) conducted a pre-election assessment of the upcoming commune and sangkat council elections. The team conducted more than 60 interviews with stakeholders comprising representatives of civil society organizations, political parties, the media, labor unions, academia, diplomatic community, international organizations, as well as voters in order to perform a detailed analysis of the pre-election socio-political situation.
The undemocratic elements in the current legal framework continue to allow room for abuse, leading to a repressed civic space and a hindrance to a free and fair election environment. The composition of the National Election Committee (NEC) and of their local counterparts are mostly affiliated with ruling CPP, making them widely perceived to be partisan by many key election stakeholders and the general public.

Crackdowns against the political opposition, CSOs, activists, and media have intensified in recent years. This has worsened when the newly adopted COVID-19 law is often used to curtail human rights and fundamental freedoms. Furthermore, many opposition candidates and members, most notably those from the recently reactivated Candlelight Party (CP), continue to experience harassment and intimidation on the ground. Despite the shrinking civic space, the upcoming elections will feature participation from more political parties compared to the 2017 commune and sangkat elections.

Civil society members, particularly election monitoring groups, were prohibited from conducting joint election observation efforts since 2017 as the government warned of the violation of the draconian Law on Associations and Non-Government Organizations (LANGO). Under the limited climate, the participation of CSOs in elections is minimal. This is also partly down to the lack of funding as many international donors stopped funding election related initiatives.

The deterioration of media freedom remains a worrying issue in Cambodia. The government has imposed measures that led to additional censorship, shutdown of news sites and arrests of journalists. This was exacerbated during the COVID-19 pandemic, with restrictions further disabling journalists from gathering and disseminating information on the ground. Media often choose to self-censor due to fear about retaliation, therefore fair election reporting is expected to be limited in the run-up to the June elections.

Although voter education is limited in the lead up to the election, active voter participation is expected as it was in the last two elections in 2017 and 2018 because many Cambodians still regard voting as a civic obligation. However, in a political space mostly dominated by middle-aged able-bodied males, more work has to be done to promote and actualize meaningful political participation and representation of women and other marginalized groups.

Overall, Cambodia still falls short of the standard of democratic elections according to ANFREL’s Dili Indicator for Democratic Elections. There will be no genuine and legitimate election outcome as long as threats against the opposition and civic society remain prevalent. Cambodian authorities must take genuine efforts toward democratization and political reform, beginning by allowing the opposition and civil society to operate freely, as this is a prerequisite for holding fair, credible, transparent, inclusive and peaceful elections.