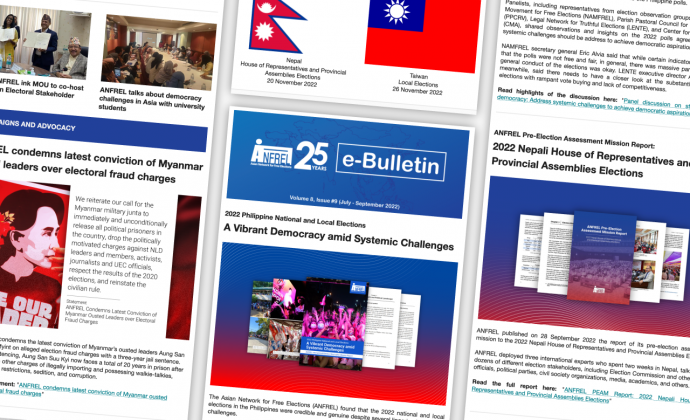 In the third quarter of 2022, the Asian Network for Free Elections released observation report on Philippine and Nepali elections, launched the Asian Media Fellowship on Election Reporting, and engaged with various electoral stakeholders.

ANFREL released the final comprehensive report of its international election observation mission to the 2022 national and local elections in the Philippines. ANFREL found that the elections were credible and genuine despite several lingering issues and challenges.

The pre-election assessment mission report for the 2022 Nepali House of Representatives and Provincial Assemblies Election was also released. Nepal is scheduled to hold elections on 20 November 2022.

Now on its second year, ANFREL expanded its pilot media fellowship on election reporting last year to cover the rest of Asia from the initial Southeast Asia scope. Applications ended on 30 September 2022. Interviews and the final selection of 10 media fellows are scheduled for the coming weeks.

Other updates from ANFREL during this quarter include: