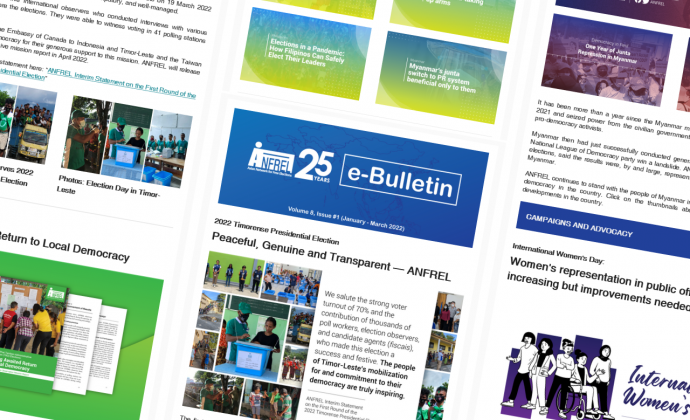 In the first quarter of 2022, the Asian Network for Free Elections (ANFREL) released reports of its observation of the local elections in Thailand and the presidential election in Timor-Leste.

The 2021 Thai Tambon Administrative Organization (TAO) elections, ANFREL found, were more genuine and democratic in nature than the 2019 general election. The final report offered recommendations which the electoral stakeholders can take into consideration as Bangkok and Pattaya are scheduled to hold gubernatorial elections on 19 May 2022.

Meanwhile, ANFREL said in its interim statement on the 2022 Timorense Presidential Election that the process was peaceful, genuine, and transparent. ANFREL observed the first round of the election. As the presidential candidate with the highest number of votes failed to secure more than 50 percent of the votes, Timor-Leste will head for a runoff election on 19 April 2022. ANFREL is set to release its final comprehensive report in April 2022.

During the quarter, ANFREL also concluded its pilot media fellowship program on election reporting for Southeast Asian journalists. Six fellows received training and mentorship throughout the program. They produced election-related articles under the program.

Here are key ANFREL updates and activities from January to March 2022: