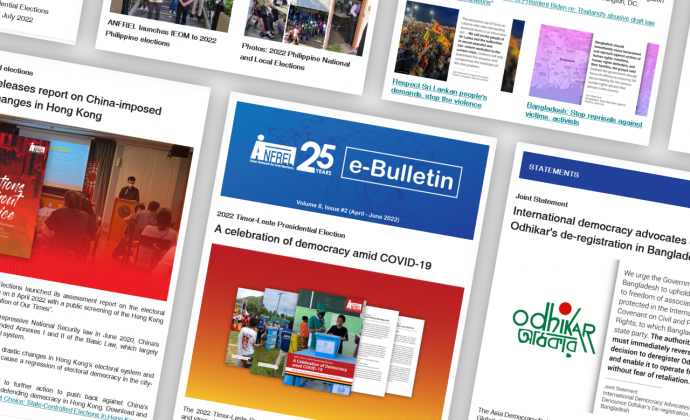 In the second quarter of 2022, the Asian Network for Free Elections (ANFREL) observed elections in Timor-Leste and the Philippines, released reports on elections in Hong Kong and Cambodia, and continue to shed light on the situation in highly restrictive and repressive countries in Asia.

ANFREL released the final comprehensive report about its observation of the 2022 Timor-Leste Presidential Election which was held on 19 March (first round) and 19 April (second round). ANFREL said the election demonstrated how democracy is celebrated and strong in the country.

The Philippines also held its national and local elections on 9 May 2022 where ANFREL deployed teams of election observers. In its interim statement, ANFREL said the elections were inclusive and transparent, characterized by the eagerness of voters to participate but, at the same time, were hounded by disruption in the voting process due to dysfunctional vote counting machines, cases of election-related violence, rampant vote buying, and pervasive disinformation and attacks on high-profile candidates.

During this quarter, ANFREL also released its report on the China-imposed electoral changes in Hong Kong and the pre-election assessment of the 2022 Cambodian Commune and Sangkat Council Elections.

Here are other key updates from April-June 2022: