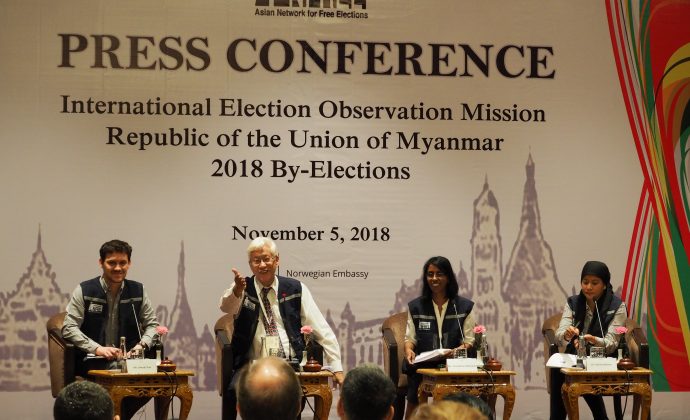 Posted by Amaël With 0 Comment In Mission Reports, Myanmar

On November 3, 2018, the ANFREL mission observed peaceful and credible by-elections with no significant incidents that could have negatively impacted the results. The electoral campaign was generally peaceful and in line with that of the 2017 by-elections. Few complaints were made, and the main subject of criticism was related to the use of images of government officials in campaign materials of the ruling party.

However, many inconsistencies were noted in the level of preparedness of polling staff and the setup of polling stations. Overall, the performance of the UEC and its sub-commissions was deemed to be good but marginally lower than that observed during the 2017 by-elections. Positive developments like the reversion of the voter list to household order or the computerization of tabulation operations were offset by negative ones such as the non-issuance of voter identification slips, a perfunctory attitude of poll workers towards election observers or the absence of a comprehensive electoral calendar.

There remained problematic areas where improvements were needed, among which were the advance voting mechanisms, the polling stations in military camps, or the updating process of the voter list.

ANFREL offers recommendations to overcome weaknesses evidenced in the 2018 by-elections, with the expectation that the national elections of 2020 will be more organized and better managed, such that the people of Myanmar may trust a rigorous and transparent democratic process satisfying the requirement for periodic, free, and fair elections.