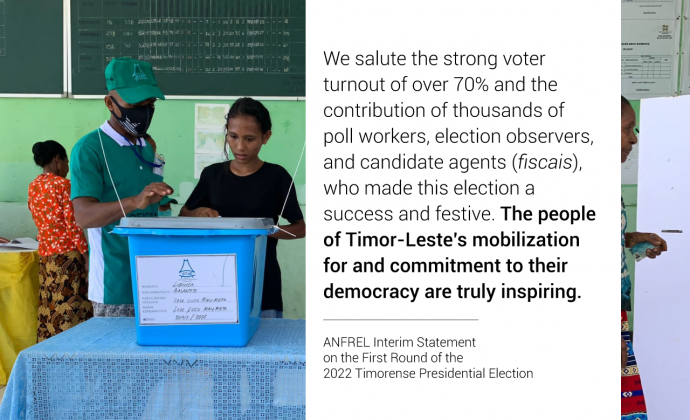 The Asian Network for Free Elections (ANFREL) wishes to congratulate the citizens of Timor-Leste, the Technical Secretariat for Election Administration (STAE), the National Elections Commission (CNE), and the national police force (PNTL) for a peaceful, genuine, and transparent first round of the 2022 Timorense presidential election.

We salute the strong voter turnout of over 70% and the contribution of thousands of poll workers, election observers, and candidate agents (fiscais), who made this election a success and festive. The people of Timor-Leste’s mobilization for and commitment to their democracy are truly inspiring.

On Election Day, 19 March, five international observers from ANFREL visited a total of 41 polling stations in the municipalities of Ainaro, Baucau, Covalima, and Dili. They witnessed a process that was open, participatory, and well-managed. The polling process was secure and the counting of votes was done in a reliable manner, albeit slow in some locations. The subsequent tabulation of votes was also found to be transparent and the rate of invalid ballots was low at less than 2%, thus confirming that the will of the voters was properly reflected in the results announced today.

Unfortunately, risk mitigation measures against COVID-19 were scarcely followed. Most of the voters and many of the polling staff did not wear face masks as mandated, despite this being the best way to curb transmission of the airborne virus. Other safeguards required by STAE, such as temperature checks, social distancing, and gloves for polling staff, were also rarely implemented. No restrictions were placed on the campaign period either. Altogether, these factors mean that the election could potentially have been a super-spreader event; this will be difficult to confirm due to the difficulty of getting tested in Timor-Leste. We call on authorities to better enforce applicable COVID-19 protocols to protect the safety of the population, especially those most vulnerable, during the second round on 19 April.

ANFREL also regrets that hundreds of voters were disenfranchised at Dili’s three parallel voting centers, including some who claim to have registered in time but whose names did not appear on the voter list, and hospitals across the country, as observed first-hand in Suai and Baucau. Indeed, patients and their families were unable to vote despite what was previously announced because of outdated voter lists, and were also not allowed to take advantage of the supplemental voter list mechanism.

While we commend the introduction of out-of-constituency voting mechanisms, we recommend that they be strengthened and expanded to the whole country ahead of upcoming elections, along with ample information for voters on how to use them. ​​There should be robust regulations and resilient technical arrangements to balance between facilitating participation and preventing issues that may affect the integrity of the voting process.

The campaign period was vibrant and mostly peaceful, despite a few violent incidents occurring, including one fatal altercation on 12 March in Baucau. Although the number of clashes was low, we encourage election management bodies to remain vigilant in order not to fall back into Timor-Leste’s history of election violence. Otherwise, the colorful campaign gathered large crowds, including many youth, and took place in a largely cheerful atmosphere across the country.

With a median age of less than 21 and 75,237 (8.8%) new voters since the 2018 early parliamentary election, democracy in Timor-Leste is increasingly the affair of the youth, who can start voting as early as 17. Young citizens were active campaigners, poll workers, candidate agents, and many were eager to cast their first ballots.

With four women candidates out of 16, there was an increase in the number of women running for the country’s highest office. Women were also involved in large numbers as polling staff, although rarely in high-ranking positions.

The vast majority of polling stations visited by ANFREL observers were also not accessible to wheelchair-bound users, thus accessibility could be greatly improved.

Campaign finance and media guidelines are lacking in Timor-Leste, especially for social media which remains totally unregulated. In consequence, many of the candidates could continue campaigning on social media during the two-day silence period, and even on Election Day, without being sanctioned. To further democratic practices and guarantee a level playing field for all candidates, reform of election laws is needed in these areas.

A total of 1,200 polling centers and 1,500 polling stations, including 9 overseas, were open on 19 March to allow 859,613 registered Timorense voters to cast their ballots.

ANFREL’s final mission report on the first round of the 2022 Timorense presidential election will be released in April.

ANFREL wishes to thank the Embassy of Canada to Indonesia and Timor-Leste and the Taiwan Foundation for Democracy for their generous support to this mission.

Download the full interim statement here: "ANFREL Interim Statement on the First Round of the 2022 Timorense Presidential Election" (English | Tetum)