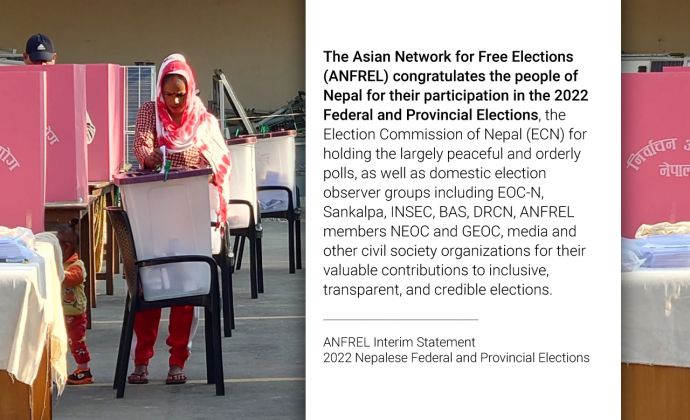 Posted by ANFREL With 0 Comment In Mission Reports, Nepal

The Asian Network for Free Elections (ANFREL) congratulates the people of Nepal for their participation in the 2022 Federal and Provincial Elections, the Election Commission of Nepal (ECN) for holding the largely peaceful and orderly polls, as well as domestic election observer groups including EOC-N, Sankalpa, INSEC, BAS, DRCN, ANFREL members NEOC and GEOC, media and other civil society organizations for their valuable contributions to inclusive, transparent, and credible elections.

On Election Day, 20 November 2022, four international observers from ANFREL visited 51 polling stations in the provinces of Madhesh, Gandaki, Lumbini, and Bagmati to watch the opening, voting, and counting processes as 17,988,570 registered voters were invited to cast ballots in 10,892 polling stations and 22,227 polling centers. During their deployment, our observers were able to witness the end of the campaign period, as well as conduct interviews with a diversity of electoral stakeholders.

We congratulate the Election Commission of Nepal for holding elections in a single phase for the first time since the advent of a new Constitution in 2015, and for using distinct ballot papers for all four elections, also a first. The decision to distribute the ballot papers one by one to voters ensured that no confusion would happen; however, ANFREL recommends that they be further distinguished in future elections by printing them in four different colors instead of just black and red. In at least two polling centers, election officers mistakenly distributed the wrong ballot papers to voters before polling was suspended1.

ANFREL observers noted that the interest of Nepalese voters in these elections or their opportunities to vote were limited, with a voter turnout of just 61%2.

To address the decreasing voter turnout, we urge the newly-elected Federal Parliament of Nepal to pass a law enabling out-of-country voting for the estimated 2,600,000 Nepali migrant workers abroad3. Similarly, Parliament should also study the passage of a law for out-of-constituency voting within the country. This would make voting easier and more economical for Nepali voters living outside of their constituencies, and would finally implement the Supreme Court order on the matter from 2018.

Polling officials performed well in ensuring a smooth voting process, and provided explanations quickly to prevent any confusion throughout the day. However, most of the polling centers observed did not open at the scheduled time of 7:00AM; some opened as late as 7:45AM.

All polling centers visited by ANFREL were laid out in a transparent manner, and representatives of political parties or candidates were present in all, sometimes along election observers, to ensure scrutiny of the polling process. Secrecy of the vote was also found to be satisfactory most of the time, although it could have been improved in some locations.

In addition, we recommend further training for election officials in order to alleviate inconsistencies in Election Day procedures. For instance, it is advised that polling staff and security personnel be better informed about the role and rights of observers so that they are always able to effectively carry out their functions. Discrepancies were also noted in the enforcement of anti-impersonation safeguards or the use of cell phones within polling stations.

The Nepal Police, the Armed Police Force, and the Nepal Army played a pivotal role in ensuring the peaceful and orderly conduct of the elections. ANFREL recognizes their contribution and dedication to the process. This being said, most countries achieve election security while keeping armed security personnel outside of the premises of polling stations; we encourage Nepal to follow suit and balance security considerations with the need for voters to have a conducive voting environment.

In Bajura district, two persons died when police opened fire after clashes had erupted in Natyaswari school4. Also in Bajura, a ballot box was set on fire5, while in Nawalparasi East, media reported that an agent of a candidate poured acid on a ballot box6. One person was arrested in Parsa for crossing the border from India with 15,000 fake ballot papers in his possession7.

Explosions occurred near polling stations in Panchthar, Bardya, Jhapa, and Kailali districts8, and police had to fire warning shots in Rautahat, Siraha, Chitwan, Dolakha, Bajura, and Humla. On 16 November, a pressure cooker bomb also detonated in Nepalganj as it was being made by members of a small group that had called for a boycott of the elections.

Voting will be held again on 27 November in 15 polling stations where it had to be halted last Sunday due to incidents.

While women have greatly benefited from the quota system introduced by the new Constitution to enter politics, it is regrettable to see that political parties are still largely restricting them to proportional representation seats and not often offering them tickets to run under first-past-the-post. The same is largely true for the Dalit, Muslim, indigenous, and other marginalized communities.

Young, independent, or newcomer candidates have however offered an unprecedented alternative to the political establishment for voters. Meanwhile, traditional political parties entered into alliances prior to the elections as they reached unprecedented power-sharing agreements.

Many polling stations visited were found to be inaccessible to wheelchair-bound voters and voters with limited mobility, especially in Gandaki province because of the province’s natural terrain. Although such inaccessibility is partly understandable, it is imperative that government buildings and thus polling stations be designed with accessibility in mind. This is to ensure accessibility not only of elections but also of public services.

ANFREL observers were allowed to follow the transportation of ballot boxes from the polling to the counting centers, which was transparent and secure.

The counting of ballots is also very transparent; it is open to agents of political parties and candidates and election observers. Inconsistencies were again observed in the implementation of the use of cameras for observers should be improved in future electoral exercises. When disagreements arise during counting, they seem to be resolved either by following the Election Commission’s guidelines or via consensus among political parties. While slow, the counting process is participatory.

There is however an inconsistency in the treatment of ballot papers found in the wrong boxes: while proportional representation ballots mistakenly cast in boxes for first-past-the-post will be
counted, the opposite is apparently not true. ANFREL recommends that the same rule be applied in both situations and across the country, and that the will of the voters always be the first consideration when counting ballots. Counting was suspended in Rupandehi-4 due to disagreements on this topic9.

It was also observed that the time when counting would start varies depending on the agreement between counting officials and the representatives of political parties. Therefore, we recommend that the Election Commission of Nepal impose guidelines on this stage of the electoral process, so that unreasonable delays would not happen.

The 2022 Nepalese Federal and Provincial Elections saw a quiet and sober campaign environment, as political parties and candidates largely complied with the Election Code of Conduct. Although there were a number of reported violations of the Code, the Election Commission responded swiftly to complaints arising from these violations. Most of the violations reported were also minor in nature.

The Election Commission of Nepal should be praised for its strict enforcement of the Code of Conduct, however further steps could be initiated by election officials in the absence of formal complaints.

A few major rallies were observed, although campaigns by political parties and candidates were mostly conducted through door-to-door campaigns and vehicle motorcades.

As observed and discussed with election stakeholders, the conduct of voter education programs needs to be expanded for future electoral exercises. ANFREL recommends that additional personnel and resources be deployed in the different wards and in diverse media and social media to be able to reach more people.

It is further recommended that the Election Commission engage in targeted voter education to further reach and increase the participation of marginalized sectors of Nepali society in elections.

ANFREL is the largest regional election observer network in Asia and has observed over 70 elections since its establishment in 1997. This interim statement will be followed by a comprehensive mission report to be tentatively published in December 2022.