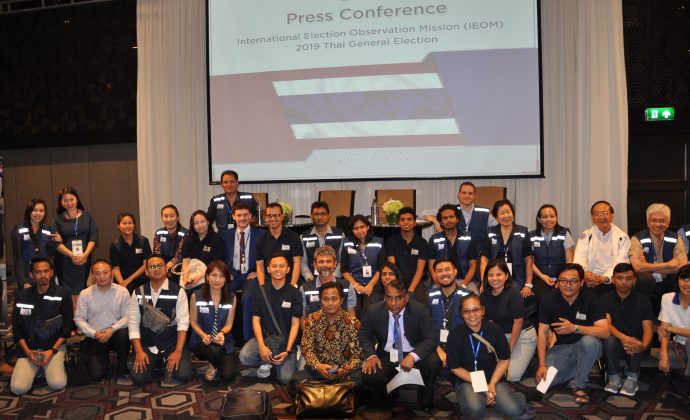 Posted by Amaël With 0 Comment In Mission Reports, Thailand

ERRATUM: A mistake found its way into our Interim Report. Invalid ballots number to just under 1.9 million and not 2.8 million as mentioned earlier, while the rate of invalid ballots remains at 5.6%. As the article in Thai media mentioning the wrong figure was amended, we have corrected our report, and apologize for any confusion.

The Asian Network for Free Elections (ANFREL) congratulates the people of Thailand on the successful and peaceful conduct of the 2019 General Election held on March 24. Through the deployment of international election observers around the country, the mission witnessed a tremendous popular effort and desire to reestablish democratic processes in the country after years of military rule. While the process displays fundamental democratic shortcomings, ANFREL recognizes this election as a first step towards genuine popular representation in governmental affairs. Through this report, ANFREL presents its preliminary assessment of the electoral process, which was crafted with internationally-recognized democratic election norms and principles in mind.

With a voter turnout of just over 65%, it is safe to say that the people still believe in the ballot and the prospect of change it can bring. Therefore, it is imperative that all issues both observers and voters saw emerging from the process be addressed promptly in order to encourage and rebuild trust in the elections.

The voting processes on Election Day ran smoothly, albeit characterized by some variances in the implementation of procedures which did not significantly impact the quality of voter experience or the integrity of the ballot. ANFREL takes issue, however, with the overly restrictive regulations regarding the validity of the ballot marks, which contributed to the 2.8 million invalid ballots. Furthermore, while there were only minor mistakes to report as the counting process began, the subsequent tabulation and consolidation of ballots were deeply flawed, which led to an announcement of some preliminary results that were wildly inaccurate on election night. The blunders did further damage to the perceived integrity of the general election, and ANFREL invites the ECT to release comprehensive election results as soon as possible in order to foster trust in the general public’s eye.

ANFREL saw a campaign environment which is heavily tilted to benefit the incumbent military junta and the candidates that it supports. Furthermore, an analysis of the legal framework revealed a plethora of legal provisions that are detrimental to the performance of the duties of the media, civil society and voters, prompting these actors to minimize or ultimately self-censor criticism against the military junta. Furthermore, the near absolute powers granted by the 2015 Interim Constitution’s Article 44 to the National Council for Peace and Order (NCPO) remained in place throughout the electoral process, and loomed above the head of the current regime’s critics.

The advance voting process on March 17 revealed strong voter enthusiasm, to the point that long queues sometimes discouraged voters from participating. As an indication of the level of preparedness of the ECT for the ballot, polling was generally transparent and orderly, but observers deployed in several provinces encountered issues in the uniformity of the implementation of electoral procedures.

The campaign period was dominated by vibrant interactions among the various parties and stakeholders. The media performed well by providing the public with comprehensive information regarding the political parties and their campaign platform. Voters seemed to possess sufficient information to arrive at well-informed votes. The 2019 General Election also saw a process which proved to be generally conducive to the participation of women and youth.

The ECT could have improved the quality of the process by doing more to disseminate information on the polling procedures, which could have alleviated much of the public’s doubts regarding the process. The lack of transparency and cooperation between the ECT and other electoral stakeholders severely limited the outflow of information, thereby fueling further distrust in the process and the institution itself.

The mission saw eager participation from Thai election monitoring organizations despite their facing the dual challenges of working under the harsh military-controlled environment of recent years and shortages of time and resources for training and planning. Regardless, these election monitoring organizations still managed to deploy observers in a number of polling stations all over the country. However, both international and domestic observers faced at times limitations in getting access to the entire electoral process, with polling stations or tabulation centers requiring additional approval from the district authorities before observers could enter the premises.