Posted by admin@anfrel.org With 0 Comment In Indonesia, Mission Reports 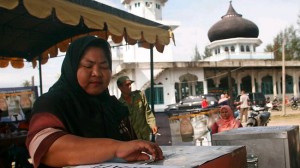 Bangkok, 04 May 2012 - The Asian Network for Free Elections wishes to congratulate the people of Aceh for their participation in the second local election held since the end of the conflict in the Province. The April 9th 2012 election is another milestone towards strengthening democracy and respect for the rule of law. This statement is an assessment of the pre-election period, Election Day, and the post-election period by ANFREL’s 11 Citizen Observers from countries across Asia as well as the USA and Canada.

The elections in Aceh mark a meaningful step in the people of Aceh’s progression towards a sustainable peace and a democratically elected government. ANFREL greatly appreciates the efforts of the electoral bodies and all stakeholders who successfully worked to maintain peace while working in a difficult post-conflict environment. Credit should also be given to the government of Indonesia, which is fulfilling their agreement to allow the people of Aceh to exercise their democratic rights based on, and through, the Helsinki Memorandum of Understanding (2005) and the Law on the Governing of Aceh (LoGA). ANFREL hopes that all stakeholders’ efforts advance the cause of representative democracy with a government chosen through peaceful, regularly occurring, free and fair elections.

While the election result has been announced and a winner declared, there are a number of issues that warrant consideration in addition to those raised in ANFREL’s first press statement. First, ANFREL would like to reiterate the importance of a peaceful election process and speak out against the serious acts of vandalism involving fanatic supporters who were organized to systematically cause damage to the KIP office and several district offices in Kab. Gayo Lues. Such acts only serve to compromise the democratic process. Those who wish to contest the results of the election should do so through legal means without resorting to acts of violence. ANFREL encourages the relevant authorities to undertake a transparent and thorough investigation of all alleged incidents.

Second, there were concerns about the election administration related to the management of the voter list (DPT). Discrepancies within the DPT were found across Aceh at various levels. While the KIP and Panwas successfully corrected many voter list issues reported to them, there remain significant issues. Among the errors discovered, ANFREL observers found lists that contained duplicate names and names of the deceased. Additionally, several people received more than one invitation letter, potentially allowing multiple vote abuse. The opposite was also found, wherein many people did not receive an invitation letter, preventing them from voting because they perhaps believed they did not have the proper documents to bring to vote. Although there is not sufficient research regarding the impact on the results of the aforementioned voter list issues, a serious effort needs to be undertaken towards the creation of a clean voter list so as to avoid disenfranchisement and reduce disputes in future elections.

Third, ANFREL observers received credible reports that intimidation against candidates took place throughout the campaign and cooling periods, largely through SMS threats from unknown and unnamed persons. ANFREL’s observation team also received many reports of intimidation against voters. Intimidation such as that scene in Aceh is an infringement against the freedom to campaign and/or the unrestricted exercise of the electorate’s free will, necessary conditions to a free and fair election. The seriousness of the matter makes it essential that the concerned authorities thoroughly investigate these allegations and that appropriate measures be taken to prevent future intimidation. Intimidation should not be accepted at any time and a free campaign atmosphere needs to be guaranteed in order to allow voters to freely choose their leaders. Candidates and parties must take more responsibility and encourage their supporters to respect the sanctity of the elections.

Fourth, it is necessary to reiterate the concerns ANFREL noted in our first press statement about Election Day itself that still need to be addressed. Poor organization of polling stations resulted in logistical problems that included: delayed/late openings, failure to follow polling station regulations regarding standardized Polling Station assignments/workflow, and uncertainty regarding closing procedures. Contrary to regulations, presentation of an invitation card was enough to get a ballot and voters’ names were not cross-checked with the voter list in most of the places ANFREL observed. Proper closing procedures were rarely followed in their entirety. Of particular concern were the handling of unused ballots and the failure to invalidate them before counting so as to eliminate the possibility of fraud. There were also issues that occurred with the processing and storage of ballots and election materials after counting. In some instances ballot boxes were stored in unsecured locations. In one instance, ballot boxes where being reopened after being delivered to the sub-district office as the KPPS were not aware of the regulation governing ballot handling.

Regulations regarding polling procedures are critical and need to be followed in order to minimize fraud. A lack of training resulted in election officials at all levels not following and/or not fully understanding regulations that had been put in place in order to prevent fraud.

Despite the issues above, this election is an important step in Aceh’s progression towards institutionalizing a truly democratic and responsive government. The problems that have been identified are not insurmountable. If Aceh can successfully address the issues it faces, it may serve as an example for other post-conflict areas in the region and the world. ANFREL commends the people of Aceh for their commitment to democracy and hopes that Aceh will continue on its current trajectory towards a lasting peace.

Final Statement on Aceh from ANFREL

The Interim Report on the Elections can be found here: