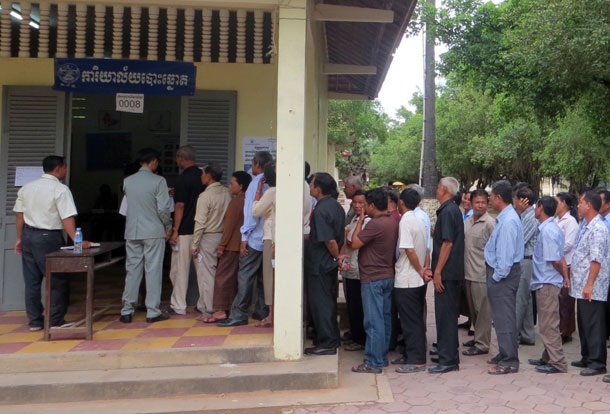 Posted by admin@anfrel.org With 0 Comment In Cambodia, Mission Reports

Since the signing of the Paris Peace Accords in 1991 and the establishment of the modern Cambodian state, the country has been predominantly ruled by the Cambodian People’s Party (CPP). During this period, CPP’s rule has faced few strong electoral challenges – the most important in 1997 from the royalist party FUNCINPEC (Front uni national pour un Cambodge indépendant, neutre, pacifique et coopératif) and in 2013 from the Cambodia National Rescue Party (CNRP), the product of a 2012 merger of the Sam Rainsy Party (SRP) and the Human Rights Party (HRP).

The country has held four commune and sangkat council elections since the adoption of the Law on Commune/Sangkat Administrative Management in 2001. These local elections are important for two reasons: first, they represent the only devolution of power in the country, and second, they act as a sounding board for what may happen in the parliamentary elections which are always held the following year.

ANFREL observed that the 2017 commune and sangkat council elections were held under a restrictive legal regime. The Law on Associations and Non-Government Organizations (LANGO) and the amended Law on Political Parties effectively limited the liberties of civil society and opposition political parties. Such legislation has further aggravated the human rights conditions in the country, characterized by arrests of human rights activists, legal charges brought against opposition party members, and threats of violence and civil war from government leaders, all of which adversely affected the climate of the campaign.

Cambodian electoral stakeholders must work more diligently to ensure a level playing field. Currently, media access, the judicial system, the legal framework, and the absence of effective campaign finance regulations are skewed to benefit the ruling party. Despite the oppressive political situation and unfair practices, the campaign was observed to be more vibrant and peaceful than in previous elections, with only minor conflicts and incidents of violence.

The electoral management body, redesigned by the Law on the Organization and Functioning of the National Election Committee (NEC) of 2015, performed well as evidenced by its fairer regulations and guidelines, despite institutional flaws in its composition and independence. A remarkable improvement in voter list management, the issuance of codes of conduct to stakeholders, and the accreditation of 74,671 observers allowed for a more transparent process which gained the trust of most stakeholders and encouraged cooperation among them.

ANFREL witnessed a smooth and efficient electoral system attributable to the NEC’s polling rules and their effective implementation. While some deviations from the standard polling process were observed, these were due to inadequate training of polling staff, and were too minor to affect the credibility of the polling process. In this regard, the capacity of national and local election management bodies should be further enhanced to effectively handle the more crucial 2018 parliamentary elections.

The efforts by the NEC and other Cambodian stakeholders to promote active and inclusive participation were rewarded with a 90.37% voter turnout. Such voter interest should be sustained and promoted by adopting policies to enfranchise migrant workers, and conducting nationwide voter education.

The results were generally accepted by most stakeholders as indicated by a significantly lower number of election result contests received by the NEC. However, the post-election situation itself was not without problems due to unclear rules governing electoral dispute resolution. More disconcertingly, the restrictive political situation again was illustrated once again by the decision of the Cambodian government to launch an investigation of the Situation Room, an ad hoc consortium of 40 civil society organizations which monitored the elections.

Overall, ANFREL’s assessment is that the commune and sangkat elections went smoothly, although with room for democratic progress. As a conclusion, ANFREL offers a set of recommendations for Cambodian authorities to consider and, hopefully, implement, prior to 2018 parliamentary elections scheduled for July 2018.