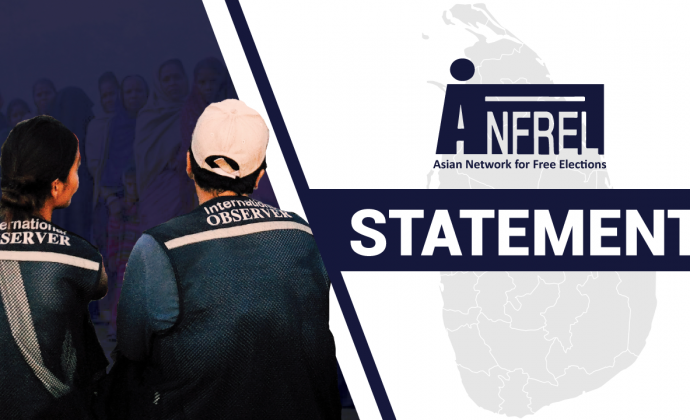 Posted by ANFREL With 0 Comment In ANFREL News, Sri Lanka

The Asian Network for Free Elections (ANFREL) is pleased to announce the launch of its International Election Observation Mission to Sri Lanka’s 2019 Presidential Election. This engagement in Sri Lanka follows 10 previous election observation missions the organization has conducted in the country since 2001. ANFREL’s team of 41 professional election observers, representing 16 countries, will start arriving on October 23, 2019.

The mission will be headed by Mr. Damaso Magbual of the Philippines, among the most veteran international election observers in the world. The team of 4 core members including 2 electoral analysts, 9 long-term observers, and 28 short-term observers will be covering all electoral districts to engage with election stakeholders, with the aim of promoting democratic norms and good electoral practices. Prior to their deployment in their assigned areas, ANFREL observers will receive briefing in Colombo.

ANFREL is the only Asian international non-governmental organization accredited by the Election Commission of Sri Lanka for the 2019 Presidential Election. The observation mission will be guided by ANFREL’s methodology, tailor-fitted to comply with the Declaration of Principles and Code of Conduct for International Election Observation.

ANFREL hopes to contribute to further strengthening the foundation of democracy in Sri Lanka by enhancing the accountability and transparency of electoral process in the country, as well as promote indigenization of international democratic principles. To support these goals, members of the ANFREL election observation team come largely from independent democracy- and human rights-centered organizations from all over Asia. As such, ANFREL will use tools for assessment such as the Bangkok Declaration for Free and Fair Elections and the Dili Indicators of Democratic Elections which reflect Asian democratic traditions.

Through this engagement, ANFREL hopes to observe a genuine electoral process which ensures the primacy of the people’s will, equal playing field and electoral environment conducive to fundamental human rights. ANFREL believes that the presence of observers can help make the entire process more transparent and accessible to the public. The mission looks forward to continuing fruitful engagement with the Election Commission of Sri Lanka, local civil society organizations, other election stakeholders, and most especially the people of Sri Lanka.

Formed in November 1997, the Asian Network for Free Elections (ANFREL) has established itself as the preeminent regional NGO in Asia working on elections and democracy promotion. ANFREL focuses on election observation as well as capacity building and development for national civil society organizations and election management bodies that are actively working on democratization in their home countries. Since its formation, ANFREL has operated in more than 65 elections in 17 countries across Asia. Our long-term aim is to build expertise on elections and governance in the region, entrenching a culture of democracy that is seen as locally developed rather than externally imposed. Through observing elections in other countries, our observers have developed a strong understanding of international best practices – knowledge that can then be applied in their respective home countries. For more about us see www.anfrel.org.