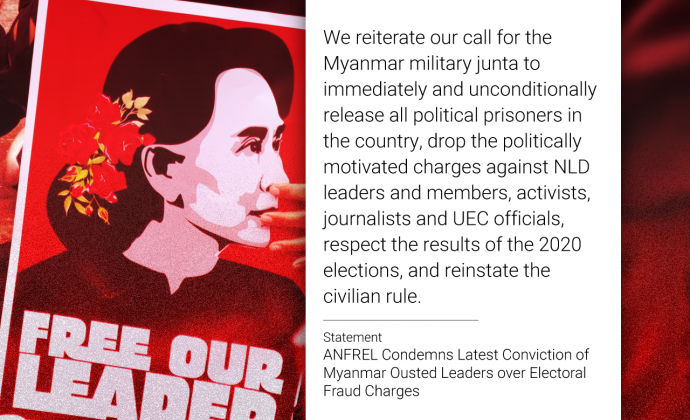 Posted by Campaign & Advocacy With 0 Comment In Myanmar, Statements

Since the military coup, the junta has repeatedly claimed the National League for Democracy (NLD) engineered its victory in the 2020 elections through widespread voter fraud, without however providing clear evidence of such claims. In November 2021, the junta-appointed Union Election Commission (UEC) filed an election fraud charge against Aung San Suu Kyi, ousted president Win Myint and 14 others of being “involved in electoral processes, election fraud and lawless actions” during the 2020 elections. According to the junta-appointed UEC, a total of 422 people have been charged with electoral fraud offenses. Meanwhile, UEC chair Hla Thein and two commissioners from the pre-coup civilian government have been sentenced to three years in prison for the charges in July 2022.

The latest conviction of Aung San Suu Kyi has again delivered a clear message that the military junta has no interest in upholding democracy, human rights, and the rule of law in Myanmar. As one of the international election observer groups that monitored the 2020 elections, ANFREL remains deeply concerned about the persecution over baseless election fraud charges through closed-door trials. According to the Assistance Association for Political Prisoners (AAPP)’s record, 23 UEC officials, including ousted UEC chair Hla Thein, remain in detention to date.

We are also disappointed by the lack of substantial progress in the implementation of the ASEAN’s five-point consensus. ASEAN and the international community must urgently step up and deploy stronger measures to halt the authoritarian rule and hold the junta accountable.

In light of the latest development, we reiterate our call for the Myanmar military junta to immediately and unconditionally release all political prisoners in the country, drop the politically motivated charges against NLD leaders and members, activists, journalists and UEC officials, respect the results of the 2020 elections, and reinstate the civilian rule.