ANFREL Concerned Over Political Crisis in the Maldives

BANGKOK, 24 FEBRUARY 2012 - The Asian Network for Free Elections (ANFREL) views with concern the political crisis in the Maldives following the ouster of President Mohamed Nasheed. Because some of the specifics surrounding the events of early February are still disputed, it is imperative that an independent and thorough investigation is carried out. What is known however is that the transfer of power was highly irregular and the fact that former President Nasheed government came to power through a democratic election must not be forgotten. All leadership transitions, whether it be a leader stepping down from office or being removed from it, should always follow constitutional principles.

There is no doubt that the 2008 elections provided a clear mandate to Mohamed Nasheed and his victory was recognized by civil society as well as the international community. Thus the present developments, where a democratic elected government is forced to leave office whatever be the pretext, needs to be carefully examined in the interest of the future of credible elections and democracy. The reasons provided by the opposition or those that led the bloodless coup cannot by any means work as a solution, especially when electoral democracy has been accepted as a stepping stone to democratize the country.

We are encouraged by President Mohammed Waheed Hassan’s ordering of a commission to investigate his ascent to power and the violence that surrounded that event. It is promising that the president recognizes the need for an investigation to shed light on the circumstances surrounding the transfer of power. The membership of that three-person commission, mainly those with close ties to long-time autocrat Maumoon Abdul Gayyoom’s administration, unfortunately puts the commission at the risk of being accused of favouritism and bias. There are serious doubts about whether its members can act in the much needed nonpartisan way required for the commission to have legitimacy. Thus, it will be doubly important that this commission, and any commission, that is investigating recent events acts with the utmost professionalism and objectivity to uncover and report the truth. If this commission proves itself unable to carry out a proper investigation, a new commission should be established with members brought from independent institutions, civil society, etc.

In addition to an investigation, free and fair elections held in a timely manner are the course of action that ANFREL believes could lessen tensions in the country. Given the questions surrounding the way the current government rose to power, the legitimacy of which has been questioned by Asian political and civil society groups, elections should be considered as an option that would allow both sides to prove their popularity and credibility to lead the citizens of this Island nation.

Article four of the Constitution of Maldives states that all the powers of the State are derived from and remain with the citizens. The current situation and the events leading up to the ouster of President Mohamed Nasheed raise many questions and doubts. An election would lay those doubts to rest and provide a reminder that all the power of the state does indeed lie with the people. The election would also instill the government of the winning party with badly needed legitimacy.

We also appeal to the South Asian Association for Regional Cooperation (SAARC) to keep an eye on its member country. From neighbouring Sri Lanka, ANFREL’s Secretary General Rohana Hettiarachchi has univocally stated, “Maintaining the good image of SAARC members could bring about a good model for the whole Asian continent. We are looking forward to seeing Maldives democracy grow together with respect for human rights.”

Given the current state of affairs, we encourage all sides to move towards reconciliation, dialogue, and compromise and, eventually, elections. We are encouraged by the possibility of early elections in the Maldives’ as a way out of this unfortunate crisis and hope that the parties move towards this outcome. We are of the firm view that it should not be difficult to organize another election and allow the people to choose a government to serve them. The elections held must be free and fair and representative of the people’s will. In this case, the popular will, expressed through a free and fair election, can be a way forward to resolve the growing conflict and lower tensions in the country by providing its leaders, whomever they are, democratic legitimacy. Trust in, and adherence to, the democratic system are of utmost importance in the Maldives and everywhere. 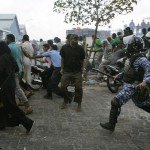