From the 12th to the 14th of November, ANFREL co-hosted the 9th Implementation Meeting of the Declaration of Principles for International Observation in Manila with one of its members in the Philippines, the National Citizens' Movement for Free Elections (NAMFREL). As a long-time endorser of the Declaration, ANFREL was honored to play host to the first Implementation meeting held outside of Europe or North America. 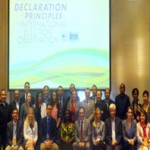