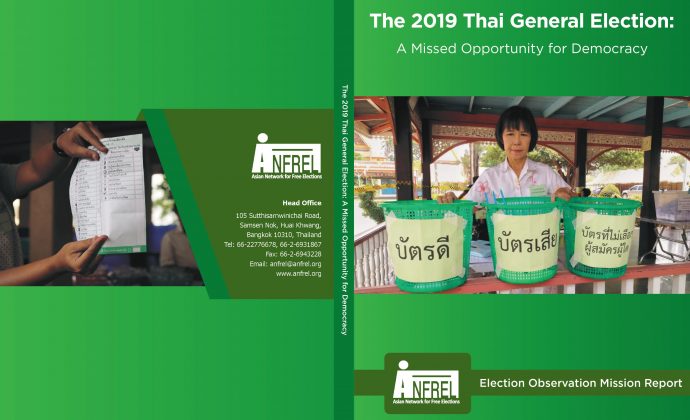 The 2019 Thai General Election: A Missed Opportunity for Democracy

Posted by Amaël With 0 Comment In Mission Reports, Thailand

To say that the Thai general election which took place on 24 March 2019 was long-awaited would be an understatement. After five years of unchecked military rule and successive election postponements, the people of Thailand finally had an opportunity to express their opinions, in what should have been a moment of collective exhilaration.

While ANFREL welcomes the much-needed return to democratic processes, it has consistently expressed concerns about the circumstances under which the general election would take place. The 2019 Thai General Election was found wanting in the most important element required for an election to be considered truly democratic. Thai authorities did ultimately fulfill their promise to hold an election, but they failed to establish the healthy political climate that lies at the heart of a free and fair electoral process. Elections are mechanisms that cannot be assessed in isolation, but always in the context of their environment, which includes prevailing socio-political conditions as well as the status of fundamental human rights.

The strong grip of the military junta and its civilian allies on the country’s affairs since the May 2014 coup ensured that the new régime would be designed to best serve their interests. All stages of the electoral process, from its inception to the announcement of results and beyond, were influenced to secure an electoral outcome that would not be too disruptive to the ruling establishment. The legal framework for elections, resting on the foundations laid out by the controversial 2017 Constitution, is the most restrictive in decades. For instance, it limits the role of the people’s representatives, fails to provide for a democratically-elected government, and introduces a unique form of guided democracy whereby an appointed Senate participates in the selection of the Prime Minister, defying the common understanding of what constitutes a parliamentary democracy.

Despite these shortcomings and a somewhat abbreviated timeframe, the electoral campaign was more vibrant than most commentators had expected, with many political parties competing for seats, conducting political rallies for the first time in five years, and mobilizing social media to reach out to voters. The election provided citizens with a chance to voice concerns that they had long been unable to express, and the campaign remained mostly peaceful, with no significant instances of violence recorded despite some name-calling and fearmongering. ANFREL collected reports of vote-buying across the country, although it is difficult to ascertain if voters were actually influenced by such activity. More disconcerting was the distribution of vast amounts of money on the eve of the election through a government-sponsored welfare program, which, in the eyes of many stakeholders, constituted an abuse of state resources.

Genuine elections should provide a space for all stakeholders to act freely in the political sphere, which was not the case for this election. ANFREL saw a civil society and a media sector that had both been weakened, stunted by years of the ban on political activities and hounded by intimidation, abuse of legal processes to suppress dissent, and other threats to the freedoms of expression and association. Nevertheless, the civil society and the media participated to the best of their abilities, providing the public with the necessary guidance and information on how to meaningfully participate in the electoral process — efforts which were often overlooked in this eventful election. Moving forward, the government should allow civil society and media to grow by addressing the challenges this mission observed and taking steps to protect dissent and promote free speech.

The Mission witnessed strong popular support for the reintroduction of electoral activity. The fact that 74.69% of voters reportedly showed up at the polls is a strong indication of the people’s belief in elections and can be seen as a rebuke of forceful takeovers of government. We hope that the wishes of the voters will be implemented through improvements to political processes to make them more inclusive, accessible and transparent. Maintaining high quality voter lists, promoting the use of PWD-friendly instruments, as well as wider information dissemination and voter education initiatives can help sustain this active voter participation and address the inordinately high rate of 5.6% of invalid ballots.

ANFREL recognizes the efforts of the Election Commission of Thailand (ECT) to achieve an overall well-managed Election Day. The poll workers braved the challenges posed by a complex and demanding voting process. Observers saw their commitment to a smooth election day through their efforts to ensure that all materials were prepared, voters were well-assisted, and vote counting in the precincts were opened to the public. While ANFREL noticed small variances in the implementation of polling procedures, these were simple and can easily be addressed by providing polling staff with more thorough training in the future. Furthermore, the support of the police force contributed immensely to the overall peaceful conduct of the polls, and no major violence or disruptions were reported by the media or other observers.

While the ECT did demonstrate good management of the voting process, this was effectively negated by the body’s poor handling of the tabulation of results. Foremost among our concerns was the ECT’s lack of transparency by not allowing observers and the media to witness this vital part of the election process. The ECT’s prohibition is contrary to the principles of transparency required for a truly democratic election. Furthermore, initial announcements of results on election night were wildly inaccurate, which fueled the public’s confusion and distrust of the figures. As a result, voters’ perception of the integrity of the vote was irreparably damaged, an outcome which could have been avoided if the election management body had been more open and transparent by formally publishing precinct-level results, or if it had at least offered a credible explanation for its secrecy. In the spirit of transparency, we invite the election management body to adopt a proactive approach for releasing election data, starting from vote counts at the polling station level, which would help mitigate accusations of partiality and result manipulation.

The general election was unfortunately marred by recurring allegations of bias on the part of the ECT, an election management body unilaterally appointed by the junta’s hand-picked National Legislative Assembly (NLA). The ECT’s regulations were hard to access, and its decisions were not always accompanied by efforts to make them clearly understood and accepted, which undermined the public’s perception of the ECT. Perhaps the most flagrant misstep by the ECT was its post-election publication of a formula for allocating party-list seats, which was marked by a significant departure from the calculation method that seems to have been previously agreed upon by all political parties prior to Election Day. The change, introduced weeks after the polls, effectively overturned a narrow anti-junta majority in the House of Representatives.

Many stakeholders have also stated their disappointment in the ECT’s adjudication of electoral complaints, which appears to have consistently favored the military proxy Phalang Pracharat Party (PPRP) over other parties. In the wake of the polls, the Future Forward Party (FFP) and other politicians hostile to the military junta found themselves the targets of a growing number of legal proceedings in what may be little more than an attempt to cow them. While most of the cases are still under investigation, the track record of Thailand’s judiciary indicates that these charges, widely perceived to be politically motivated, may posit real threats to some newly seated representatives from the anti-junta camp. Therefore, we call on Thai authorities to address these matters with the utmost standards of transparency and accountability, and for the people to remain vigilant and ensure that all sides benefit from equal treatment under the law.

Altogether, the shortcomings highlighted above and detailed at length throughout our Mission Report prevent ANFREL from considering the 2019 Thai general election anything other than partly free, and not fair. It is regrettable that the people’s initial faith in the process and their enthusiasm to turn out on Election Day did not transform into a broadly accepted outcome, which in turn could have contributed to the country’s long-term political stability. Instead, controversial election results and subsequent negotiations in Parliament have again sapped much of the public’s trust in politics, with only 12.9% of Thais believing that the new Prime Minister and government would be legitimate. As the political future of Thailand looms uncertain yet once again, an unfortunate predicament that has been normalized in the minds of Thais, it is essential to address the fact that this latest Thai election was not a truly democratic process but at best a missed opportunity which failed to deliver on the people’s expectations.