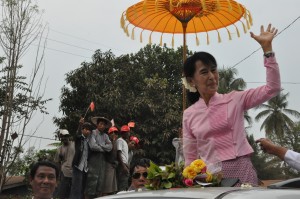 From a democracy activist to a parliamentarian, the journey for Aung San Suu Kyi has been long and arduous. She has had to spend the last two decades of her life under house arrest in her struggle to bring human rights, democracy and justice to the people of Myanmar. Now that she has won an election and is faced with the challenges of translating her words into action, the journey appears to be even tougher. The expectation levels are higher and ‘The Lady’ (as she is popularly called) knows it too well.

Minutes after she delivered her election winning speech at her party headquarters in Yangon, the talk doing the rounds was that “Daw Suu can fulfill everyone’s needs in Burma.” From the ordinary shopkeeper, to the municipal cleaner, student, housewife and the daily-wage earner said the same thing. People were not ready to listen to any other argument that tended to raise doubts or even comprehend the bargaining space she would have in parliament to be able to provide “tailor-made” solutions to the problems that plagues the country and its people.

Therefore, it is not surprising to see the media space getting flooded with analysis, opinions and questions on her temperament to continue her “grand political goals,” and at the same time deal with “bread and butter issues.” Some have even questioned her ability to get a handle on the economics of daily life in Myanmar.

There is no doubt that the bread and butter issue is important and expectations levels will rise, but what must not be lost sight of is the fact is that the present situation of Myanmar has resulted out of decades of suppression of peoples’ rights and liberties. The years of economic mismanagement or under-development is intrinsically connected to subjugating the people to living under fear and total control by the military.

Thus, where a society continues to be afflicted by a policy of subjugation and repression of the rights of minorities and tribes what assumes greater significance than merely the issue of uplifting people’s income levels or bringing jobs to every home, is the issue of justice and respect for rights of citizen. At the heart of the Myanmar’s problems is this bigger question of bringing justice to all and unless this is addressed no other cure can treat the social ailments that afflicts Myanmar.

During a recent audience with Aung San Suu Kyi at a function to mark student activists’ Ko Phone Maw’s and Ko Soe Naing’s 24th anniversary it was evident that she was aware of the fact that each passing day she would be weighed in by people’s expectations of diverse kinds. Though she did not mention it, but she gave enough indications to suggest that the question of bringing justice to the people tops her agenda. The 88 Generation students that supported her decision to contest in the elections described this as “the starting point.” Ko Ko Gyi, a leader of the 88 generation students is categorical in that “no transformation, economic or otherwise will be meaningful without justice for all.” There are still many political prisoners in Myanmar’s jails and daily atrocities continue to be committed by the military and the State against the people, women and children in the Kachin state and elsewhere.

No doubt that people want their “Mae Suu” to bring happiness into their lives but they ate fully aware that better income, food, house, education etc would be meaningless if there was no peace, continuous war and conflict (in the ethnic belts) resulting in a polarized society. “Right now I don’t think the question of food and economic development is so important for me or my people. We need justice and citizens’ rights and then we can think of other things, “ says Ko Win Cho a former independent candidate and political thinker.

Such reactions resonates all over the country, be it in Sagaing, Magway, Mon and even in Irrawaddy, which is still recovering from the devastation caused by the cyclone Nargis in 2008. “We are not Ethiopia, we have enough so let’s not divert the issues and get mixed up. We need justice,” said a group of youths in Irrawaddy when asked about improving economic conditions of the people. “Where there is justice there will be good economy,” is what others seem to believe.

But the bottom line is even if it the question of justice or peace (before the bread and butter issue), the onus is still on Suu Kyi to provide the answer. To do this she is faced with the challenge of fine-tuning to the demands parliamentary politics. The role as parliamentarian is somewhat alien to her, as all along she has been campaigning for the same question of justice, rights and peace from the outside. The government may be all out to offer a ministerial position in its longing to legitimize its reforms agenda, but the lingering question is will Suu Kyi yield or sit in the opposition or accept a altogether different role.

Those close to her would say, “It’s hard to say. Only she knows.” A few months back Win Tin, one of the senior most member of the Nationalist League for Democracy (NLD) had said, “The Lady knows what is good. We the party leaders do not know much.” This was in response to the question on the discussion between Suu Kyi had Myanmar president Thein Sein on August 2011.

Suu Kyi herself doesn’t’ seem to be too worried about what is being said or speculated about her new avatar as a politician and how she would handle the demands of day-to-day issues or bringing peace to the countries conflict torn areas. She also does not seem to think that what her campaign talks on democracy and constitutional change were merely rhetoric’s as is being made out to be. Her close aides believe “she promises and delivers. She has done that all her life and will do it now, so the premise of what is to come should not start with doubts.”

NLD’s founding member a key architect in shaping the party’s road map, U Tin Oo said, ‘The Lady is not an ordinary lady but a person who stands tall for liberty, democracy, rights and peace, so her influence will be strong.”

(The author is a political analyst and writes on Myanmar/Burma politics and development. He has been doing on his research on South East politics for over 7 years now. He is currently association with the Anfrel-Foundation, Bangkok.)