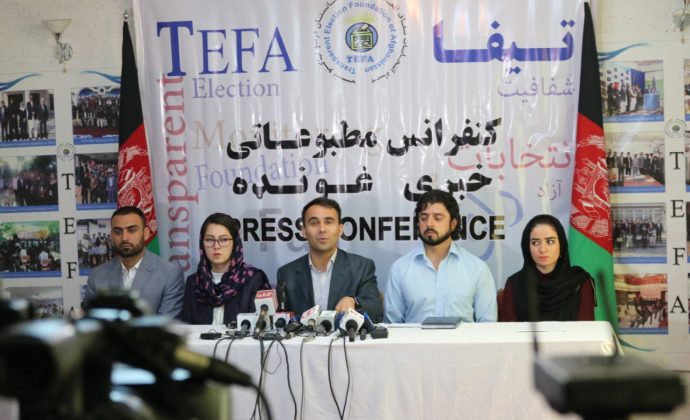 Posted by Rang ANFREL With 0 Comment In Afghanistan, Network News

Kabul: TEFA welcomes the extension of voter registration process in capital of the provinces by the Independent Election Commission till 12rd of June of the current year and perceives this round of extension as an opportunity for resolving all the drawbacks and challenges of the previous month, but it is highly crucial to bear in mind the fact that as long as we do not discover and identify the root causes and reasons for why people’s participation in this substantial process is dramatically low, the consistent extension of the registration process for numerous months will not be the only solution for our today’s problems.

TEFA as a professional and national organization calls the Independent Election Commission to develop an action plan for resolving the challenges and threats to the registration process in addition to extending it. Based on the assessment of 34 provinces, the main and noteworthy challenges when we speak on Voters’ registration process are insecurity in some provinces, lack of National ID card, lack of public awareness, public’s discontent from parliament and government operation and functions and insufficient trust over the process and election management bodies.

IEC is expected to endeavor in minimizing the level of challenges on the way of this process and to develop a coherent mechanism for every single one of it, alongside the extension of the process.

IEC illegally and going totally in contrast with the majority of votes of the commission members, has recently announced that from now on those eligible to vote can use their copy of national ID card to get registered for the sake of addressing people’s issues and to have their wide participation in registration process.

The Election Commission assured that this commission has developed a mechanism to avoid duplicate voting and other related drawbacks included in this process, but related to what IEC has stated, it is important to know that in accordance with the Election Law, Article 19, section 2nd; “The commission cannot amend relevant bills and procedures during the electoral process”. This decision of government and commission is a direct violation of the Election law.

TEFA declares this act of IEC severely problematic and is concerned about its drastic outcomes owing to the fact that till this point the commission could not develop a prestigious database in the commission and no proper mechanism yet exists for distinguishing between original and fake national ID cards in the Voter and Candidate registration process. Use of national ID cards copy not only ends up being problematic in voting process, but it also creates deficiencies and challenges in candidates nomination process and provision of the supporters ID cards, and it creates the base for deception and fraudulent and corruptive practices in different phases of elections.

Imposition of this plan over IEC by the government while neglecting the objections of 4 commission members is an explicit interference of the government in electoral activities and IEC would solely be held accountable for the unfavorable outcomes of this decision.

In most recent weeks, it has been apparent that the Afghan Government has meddled in some of the technical decisions of IEC which were meant to be made solely by the Commission itself. TEFA as an observer foundation views this act of Government contrary to the stated law and soundness of the elections.

Based on the information provided to TEFA, it is likely for electoral boundaries for Parliamentary and district Council election to be divided into smaller boundaries. TEFA believes that in current situations alongside time constraints, dividing the electoral boundaries is extremely concern worthy and it is technically not implementable.

IEC could not introduce 3 individuals out of the remaining applicants for the position of Head of Secretariat at IEC to the Afghan government within the timeframe of 60 days, and this commission is still being led by the acting CEO.

TEFA as an independent observer makes its recommendations on resolving the existing concerns and challenges: