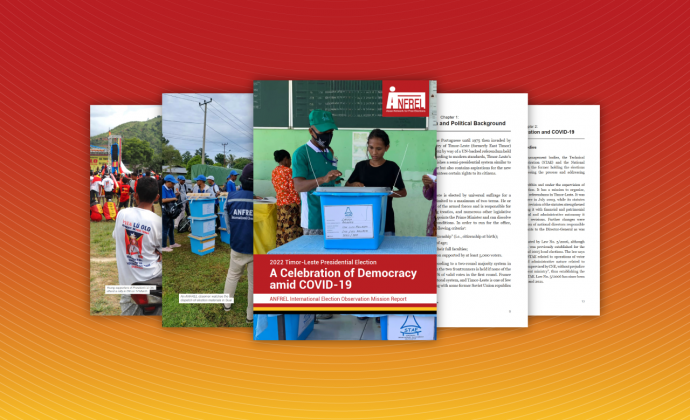 2022 Timor-Leste Presidential Election: A Celebration of Democracy amid COVID-19

Posted by ANFREL With 0 Comment In Mission Reports, Timor Leste

The 2022 Timor-Leste Presidential Election demonstrated how democracy is celebrated and strong in the country, said the Asian Network for Free Elections (ANFREL) in the final comprehensive report on its observation of the election.

ANFREL released the report on Tuesday, 28 June 2022, and thanked the electoral stakeholders for their commitment to a successful election. This follows the interim statement on the first round of the election that ANFREL released on 21 March 2022.

As Timor-Leste prepares for the parliamentary elections by 2023, ANFREL offered recommendations on several areas for improvement that the country can consider including:

• Balance should be struck to ensure safety of electoral stakeholders while exercising their rights as enforcement of risk mitigation measures against COVID-19 during the election was lacking compared with most other Asian countries.
• Improve regulation on online campaigning, campaign finance and the media environment to contribute to a more equal playing field.
• Expand and strengthen mobile voting and parallel voting to make elections more inclusive.

Timor-Leste held the first round of its presidential election on 19 March 2022. The country went into a run-off election on 19 April 2022 as no candidate gained majority votes.

ANFREL deployed five international observers in Timor-Leste during the first round of the election. They conducted interviews with a diversity of candidates, supporters, election and security officials, members of the media, and voters.

The ANFREL election observation teams visited 41 polling stations on Election Day. Due to logistical constraints, ANFREL was not present in the country for the second round of the election.

This publication was made possible thanks to the generous support from the Embassy of Canada to Indonesia and Timor-Leste and the Taiwan Foundation for Democracy.

Download the full report: "2022 Timor-Leste Presidential Election: A Celebration of Democracy amid COVID-19"