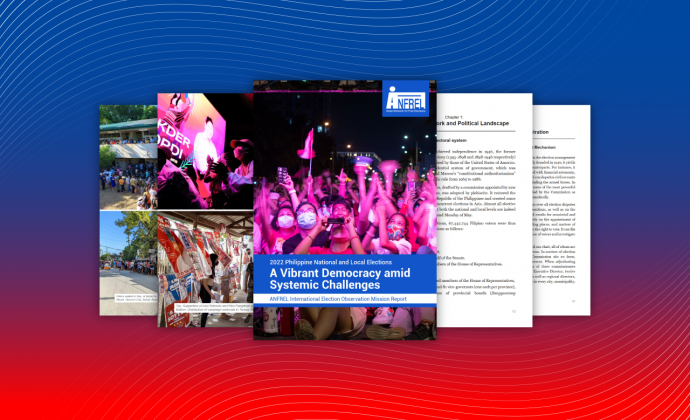 Posted by ANFREL With 0 Comment In Mission Reports, The Philippines

The 2022 national and local elections in the Philippines were credible and genuine despite several lingering issues and challenges, said the Asian Network for Free Elections (ANFREL) in the final comprehensive report of their international election observation mission to the Philippine elections.

ANFREL deployed 15 international election observers from 11 countries who interviewed hundreds of electoral stakeholders including candidates, voters, election officials, members of civil society and the media across 14 regions of the country. They observed the electoral process in 197 clustered precincts on Election Day. Voting in Kuala Lumpur, Malaysia, Bangkok, Thailand, and Taipei, Taiwan were also observed.

ANFREL said that the Election Day on 9 May 2022 was largely peaceful, orderly and safe amid the COVID-19 pandemic. The electoral process was also technically sound despite a number of shortcomings. Hundreds of vote counting machines and related SD cards failed which highlighted the poor contingency planning and communication of the Commission on Elections (COMELEC) where up to a million voters had to either wait for extensive hours to vote or were likely disenfranchised altogether. The secrecy folders were also insufficient to secure the privacy of voters in casting their ballots.

The issues that ANFREL noted requiring immediate attention are: