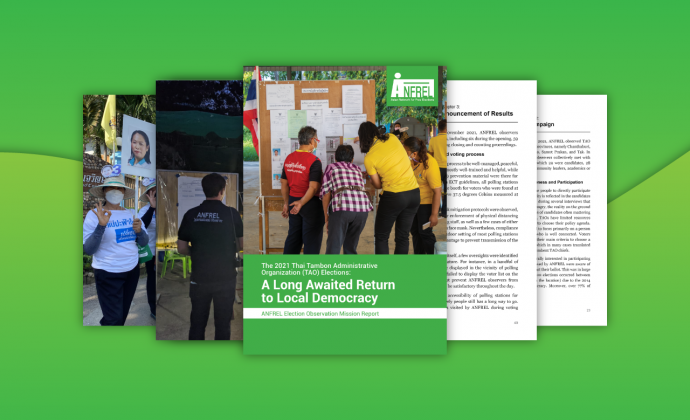 Posted by ANFREL With 0 Comment In Mission Reports, Thailand

The Asian Network for Free Elections (ANFREL), in its final comprehensive report on its observation of the 2021 Tambon Administrative Organization (TAO) elections in Thailand, said the polls were more genuine and democratic in nature than the 2019 general election.

ANFREL said the conduct of the first tambon elections since the 2014 coup marked the near-complete return of Thailand's local institutions to democratic governance.

Around 27.6 million voters were invited to participate in the elections which were held on 28 November 2021. Over 125,000 candidates vied for the positions of chief executives and councilors of 5,300 TAOs across the country.

The report released on 8 March 2022 looked at the legal framework on elections, the campaign environment, as well as the voting and counting process on Election Day.

Most people interviewed were eager to vote and knowledgeable about their choices. More and more young people were also seen clamoring for change in the electoral process. Women were more visible and active as either candidates or polling staff. ANFREL also observed that the polling staff were well-trained, reliable, and committed to their service to safe voting during a pandemic.

There were, however, voters who were disenfranchised due to the lack of advance or out-of-constituency voting for the local elections. Vote buying also remains prevalent in Thailand of which more enforcement of existing campaign finance laws would be welcome to prevent it.

ANFREL also said that while the assessment is mostly positive, Thailand still falls short of Asian standards and best practices for election management, most notably in guidelines for printing and counting of ballots which do not take fully into account the will of the voters

With the generous support of the British Embassy in Thailand, ANFREL deployed six teams of international election observers in the provinces of Chanthaburi, Chonburi, Nakhon Ratchasima, Phayao, Samut Prakan, and Tak. The observers interviewed a diversity of stakeholders and witnessed the vibrant campaign period and a peaceful Election Day.