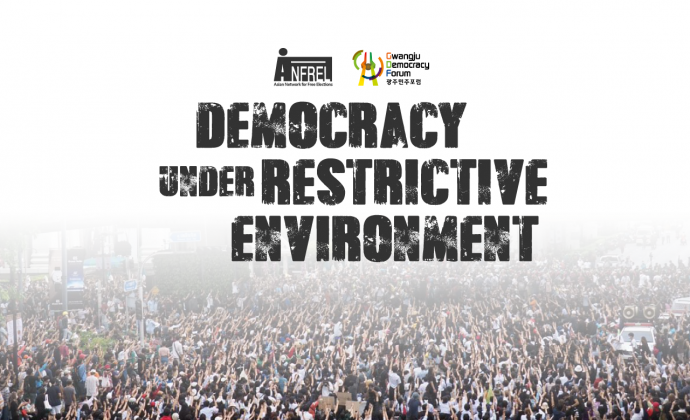 The Asian Network for Free Elections (ANFREL) hosted a session in the 2021 Gwangju Democracy Forum about “Democracy under Restrictive Environment” on 19 May 2021. The session discussed the state of democracy, challenges and threats in the Asian countries that saw democratic regression in Hong Kong, Cambodia, Thailand and Myanmar.

Here are the highlights of the presentation of ANFREL’s invited panelists:

Aileen Calverley of Hong Kong Watch said for too long, Carrie Lam and the CCP officials have been able to act with impunity, suspending freedoms and violating human rights in Hong Kong. The recent introduction of the National Security Law (NSL) in the territory has led to arrests of key pro-democracy figures and prosecution of the media, among others.

Calverley said 47 pro-democracy activists who participated in the election primaries were charged with subversion of state under NSL. She also said around 380 district council members expect potential disqualification in the coming months.

The election primaries were held in July 2020 to select candidates from democratic parties for the legislative council elections in 2020. In 2019, the pro-democracy movement saw a landslide victory during the district council elections.

Calverley said it is time to wake up and stand up for Hong Kong. She suggests to have a UN special envoy or special rapporteur on Hong Kong to monitor the situation on the ground.

Koul Panha of the Committee for Free and Fair Elections in Cambodia (COMFREL) said Cambodia is severely deteriorating into a one-party system as the current ruling party controls all state institutions including the National Election Committee.

Panha said rights and freedoms are restricted in the country including freedom of expression, freedom of association, right to participate in political activity.

Prior to the 2018 elections, the main opposition party, the Cambodia National Rescue Party was dissolved and its members banned from running for office. Several independent media outlets were also shut down.

As the country is set to hold Commune Elections in 2022 and National Elections in 2023, Panha called for the restoration of rights and ensure that Cambodian are free to exercise their fundamental rights and freedoms before the elections.

He said there has to be a political reconciliation and the ruling party should set a dialogue with the opposition. He said political prisoners should be released and their political rights restored to participate in politics. He also called for the free exercise of press freedom in the country.

Yingcheep Atchanont of Internet Law Reform Dialogue (iLaw) said that he remains optimistic about the future of Thailand and democracy as more Thai people are aware of their rights and the political structure.

The country held elections in 2019, the first since the 2014 coup, but Atchanont said that elections were more of a performance, a play that the military held to show the world that there is democracy. He, however, said the military used the government budget to promote their party. He also said the formula for allocating parliamentary seats was also changed to take away seats to the main opposition party Future Forward of which the seats were given to “no-name” parties to vote for Prime Minister Prayut Chan-o-cha.

When Future Forward was dissolved, student movements all over the country gathered in their campuses. In 2020, big protest actions were conducted in different parts of the country demanding amendments to the constitution, calling for the resignation of PM Prayut Chan-o-cha, and calling for reforms in the monarchy.

The authorities responded with a crackdown on protesters. Atchanont said 92 people have been charged in 85 cases under the lese majeste law which prohibits insult of the monarchy. In recent protests, the police have also used force to disperse the crowd which include the use of water cannon, tear gas and in some instances firing of rubber bullets.

Atchanont, however, is saddened with a wave of people considering leaving the country due to the frustration with the situation, but he said if they stay, there will be hope.

Mya Nandar Thin of Myanmar said the democracy and human rights in Myanmar have collapsed following the military coup which seized power from the civilian government on 1 February 2021.

She said the military is committing crimes against humanity by killing, torturing, and arbitrarily arresting peaceful protesters. As of 18 May 2021, the Assistance Association for Political Prisoners Burma has reported that 805 have been killed while 5,237 have been detained since the coup.

Mya Nandar Thin said institutions have been weakened as the military continue to block groups that participate in protests including CSOs, student movements, labor movements, among others. The attacks in villages in some areas posted security threats leaving hundreds displaced.

The Gwangju Democracy Forum is an annual international meeting organized by the May 18 Foundation that brings together "democracy advocates, activists, researchers and policy-makers to discuss and reflect on the state and challenges of democracy at the local, national and global levels as a way to commemorate and practice globally the spirit of May 18 Gwangju Democracy movement in 1980.