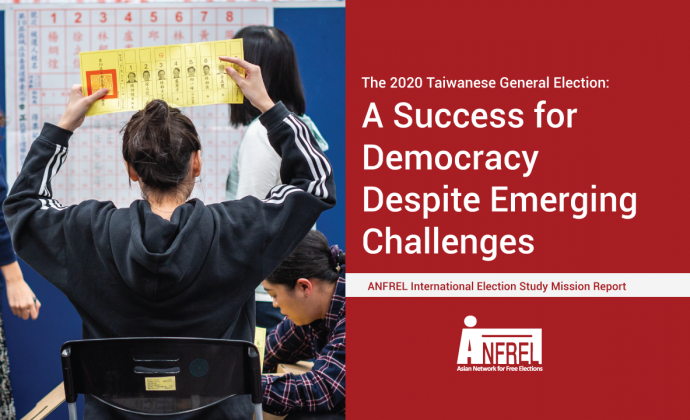 2020 Taiwanese poll a success for democracy despite challenges — ANFREL

Posted by ANFREL With 0 Comment In Mission Reports, Taiwan

The 2020 Taiwanese General Election was conducted smoothly and transparently, the Asian Network for Free Elections (ANFREL) found in their study mission saying it demonstrated the robust democracy that Taiwan has become.

On 11 January 2020, over 19 million registered voters of the Republic of China (also referred to as Taiwan) went to the polls to elect the country's 15th President and all 113 members of the Legislative Yuan.

ANFREL, a leading NGO in Asia working for the promotion of democratic elections, said in their study mission report that while no electoral process is perfect, the 2020 Taiwanese election can be labeled as a successful exercise for having been conducted in accordance with a clearly established legal framework, a vibrant electoral campaign environment, and high quality of election management as the Central Election Commission’s oversight of the process was efficient and orderly.

Further, ANFREL said that the Election Day proceedings were found to be capable, transparent, and neutral and the vote counting was both quick and reliable, with the results announced within hours of the polls closing. Losing candidates also displayed political maturity when they conceded defeat on the night of the election.

ANFREL, however, cited several areas where Taiwan can still improve on including the lack of alternative voting procedures for certain groups like overseas Taiwanese citizens, persons with disabilities, and elderly, among others which could lead to disenfranchisement and high voting age threshold of 20 years old, which is second-highest in Asia.

Concerns over the proliferation of fake news and disinformation during election were also raised and its spread in both traditional and social media which could destabilize the foundations of democracy in Taiwan.

Overall, ANFREL said Taiwan is an advanced democracy with solid electoral processes, that other Asian countries may look up to in order to reflect on their own shortcomings.

ANFREL, with a grant from the Taiwan Foundation for Democracy, deployed an eight-member team of international experts from seven different countries to assess the quality of elections in Taiwan.

The initiative was conducted in accordance with the Declaration of Principles of International Election Observation (DOP-IEO), and produced an independent assessment consistent with international and regional standards of free and fair elections, including the 2012 Bangkok Declaration on Free and Fair Elections. ANFREL previously deployed international observers to elections in Taiwan in 2004, 2008, and 2012.