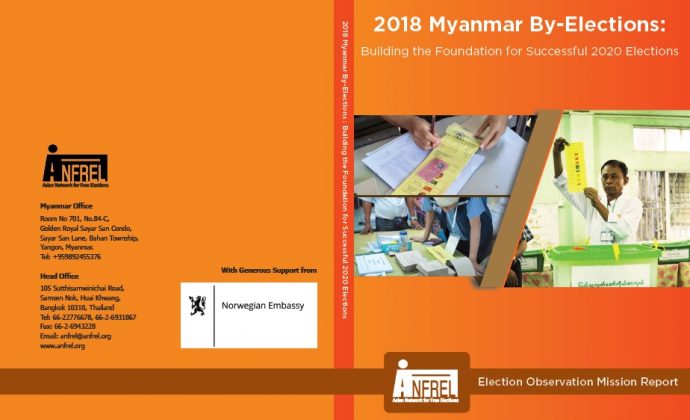 Posted by Campaign and Advocacy With 0 Comment In Mission Reports, Myanmar

A relatively new practice in Myanmar, by-elections are defined in the Political Parties Registration Law of the Union of Myanmar as “elections designated and held by the Commission from time to time for constituencies which become vacant due to the postponement of election in any constituency or resignation, death, termination or revocation of duty from a Hluttaw representative in accord with law within a regular term of Hluttaw”

By-elections ensure that vacated slots in various levels of parliament are filled up. This is a commendable practice since it means continuing representation of constituencies which would have been ignored or marginalized if vacated slots remain unfilled. Needless to say, conducting by-elections entail expenses for the government because running by-elections in limited constituencies is more expensive than holding a nation-wide general election on a seat-to-budget ratio.

If media coverage was to be the basis for assessing the interest of the public in the 2018 By-Elections, then this did not generate as much interest as the 2017 exercise (the first by-elections was held on 1 April 2017). The reasons cited by political analysts were, the balance of political power in the parliaments will not be affected by the results and the announcement of the election by the Union  Election Commission (UEC) came quite late (on 8 May 2018 or six months before the election day). Surprisingly, however, the voters’ turnout in the 2018 exercise is higher than the one in 2017.

The 2018 By-Elections was conducted in 13 constituencies in 9 regions/states involving a total 1.383 polling stations and 901,300 eligible voters. The voters’ turnout or percentage of voters who cast their votes was 42.4 percent or 382,961 voters out of the 902,750 eligible voters going to the poll stations.  The highest turnout was in Kanpetlet at 67.7 percent turnout while the lowest was in Lechar at 31.6 percent. The turnout in 2018 was a lot better than the 36.77 percent turnout in the 2017 By-Elections.

The results of the 2018 By-Elections (7 NLD, 3 USDP, and 2 from minority parties, and 1 independent - of the 13 seats that used to be held by the NLD) is seen as a definitely a gauge of voters’ approval or disapproval of the performance of the ruling party. NLD party leaders rationalize the loss of 6 candidates to lukewarm campaign, poor party organization at the township and village tract or ward levels, fielding unpopular local candidates, and poor candidate selection procedure.  More significantly, the NLD losses were consistent in ethnic constituencies. NLD is still non-committal in acknowledging the losses as due to poor performance, failure to implement its 2015 election promises, inaction on promise to amend the constitution and achieve internal peace.

All election observation missions of ANFREL are put together in a published Final Report distributed to election stakeholders in the country and to friends and sponsors of ANFREL. The report presents the integrated view and observation of its team of trained and experienced international observers and political analysts. The objectives of this Report are first, to compare the gains or reverses as the case may be, in the conduct of the 2nd by-elections vis a vis the 2015 General Elections and the 2017 By- Elections. The second objective is informed by ANFREL’s experience in observing elections throughout Asia and participation in covenants upholding international principles of free and fair elections. Hence, the recent elections are being examined in light of these principles and standards.

ANFREL is encouraged by the openness of the Union Election Commission (UEC) of Myanmar in seriously considering and translating into an action plan the recommendations posed by the international and domestic election monitors during the 2015 elections. Some of these were adopted in the 2017 By-Elections. This gesture of openness and willingness to level up its capability in every election is a model for management election bodies (EMB) in other countries.

The next general election in 2020 is critical for Myanmar because this will provide a venue for electors to change or maintain the leaders they chose in 2015 through the power of the ballot. On the part of the government, it will seek affirmation for a second term or face rejection of its performance. These are the tests of a sustainable democracy, something that is taken for granted in other countries but are still baby steps in Myanmar. ANFREL supports the right of the people to choose their leaders in a free, fair, clean, and open elections. This report focuses on areas for improvement in the next general elections in 2020.

Among the notable gains in the administration of the 2018 elections are: encoding in computers (using Excel Office program) at the township UEC of Poll Station counts (Form 16) which facilitated a more accurate tally of votes and subsequently earlier release of results, clearer guidelines in appreciating and interpreting marks on the ballots thereby minimizing invalid votes, changing the ordering in the voters’ list from “family book” to alphabetical or numeric system (based on the ID card number), and enabling PWDs and elderly voters to vote during inside constituency advance voting days.

The following are the areas which need to be reviewed and given serious consideration: the suspension of the preparation and distribution of the voters’ identity slip, non issuance by UEC of the Election Calendar which would have guided everyone concerned about activities leading to Election Day, guidelines and schedule of out of constituency advance voting, and uneven or inconsistent implementation of UEC central office directives at the township level.

The following are the persistent aspects of the election system in Myanmar which may take a longer time to change as these need legal and structural intervention: the 25 % quota allocation for military officers in the different parliaments, imbalanced participation of women in the election landscape starting from the non-appointment of a female at the top level of the UEC and lack of female candidates, inadequate campaign finance regulations, and low representation of ethnic people in elected positions.

In general, the gains made in the 2015 General Elections and the incremental improvements in the 2017 By-Elections were sustained in the 2018 By-Elections, indicating strengthened electoral democracy in Myanmar.