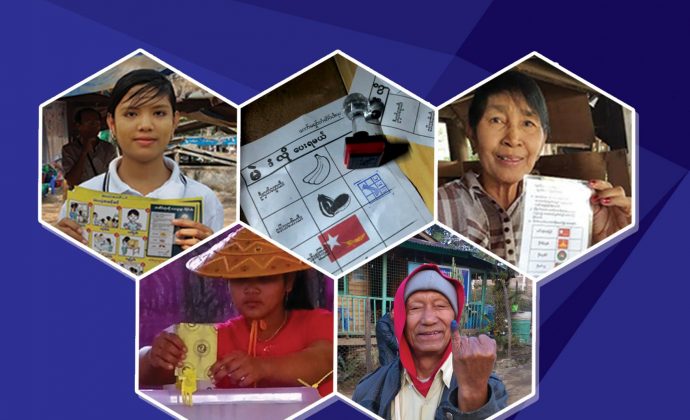 Posted by Amaël With 0 Comment In Mission Reports, Myanmar

A relatively new practice, by-elections are defined in the Political Parties Registration Law of the Union of Myanmar as “elections designated and held by the Commission from time to time for constituencies which become vacant due to the postponement of election in any constituency or resignation, death, termination or revocation of duty from a Hluttaw representative in accord with law within a regular term of Hluttaw.”

The by-election observation mission and subsequent report has two primary objectives. First, this report offers a chance to compare and contrast the 2017 By-Election with the 2015 General Elections to evaluate any improvements or decline in the quality of the electoral process. This is helpful in order to gauge the progress of reform made since 2015. The UEC’s 2016 Post-Election Report revealed the election management body’s (EMB) sincere consideration of, and response to, recommendations from national and international stakeholders to improve their electoral system. The UEC’s effort is highly appreciated and is a valuable exercise for election management bodies in other countries to learn from.

The second objective is more common for ANFREL, but no less important. It is to examine the By-Election process based on international standards and comparative analysis with the electoral experiences of other Asian countries. The result of this second objective can be used to predict the current level of readiness for the 2020 General Elections and identify those areas requiring the most focused attention. Overall, this final report tries to include a combination of analysis between the previous General Election in November 2015 and the By-Elections on April 1, 2017 as a helpful tool to improve the quality of the next general election.

When compared with the 2015 General Election, a number of notable improvements were observed, among them: an updated voter list, improved transparency measures including better access to polling processes in military camps where domestic and international observers were allowed to observe officially, a better-managed inside constituency advance voting process, more knowledgeable and confident polling officers, increased number of women appointed as UEC staff and polling station officers, a committed and better trained EMB, more cogent valid vote guidelines regarding stamping which lowered the occurrence of mis-stamped ballots, faster and more transparent counting and tabulation processes, successful elections in some areas with security concerns in 2015, and a pilot project to make some polling stations accessible to persons with disabilities.

However, there are still some aspects of Myanmar’s election system which need improvement. Principally, the electoral framework has not changed much compared to 2015, especially with regard to the articles supporting a quota of appointed military in parliament, a weak and/or unclear advance voting regulations, especially for outside constituency voters, a continued lack of female candidates, insufficient voter education, some inconsistencies in election procedures especially in counting and aggregation processes in polling stations, insufficient campaign finance regulations adopted and implemented, and lower voter turnout in general.

There are no perfect elections, even in the most democratic and developed countries. But better progress towards free and fair elections is important, especially in a country that has suffered such undemocratic conditions for so long. This electoral progress was assessed by 11 international observers who over the course of 2 weeks relied on mobile observation to collect data from all 22 townships in the eight states/regions where by-elections were conducted. Two expert electoral analysts stationed in Yangon for one month provided further analysis. Primary data were gathered through observation and deep interviews with key stakeholders. The 2008 Constitution, legislations focused on the UEC and various Hluttaw, electoral procedures and manuals, printed and online media, and other literature related to the election provide some of the additional data used for analysis.

In general, the 2017 By-Elections showed continued progress and positive trend lines for electoral democracy in Myanmar. There were significant improvements compared with the 2015 General Elections. Nevertheless, there are still some principal aspects of the election system and its procedures that need to be improved in the near future, especially considering the 2020 General Elections coming soon. Highlights from ANFREL’s observation of the by-election process are discussed below.